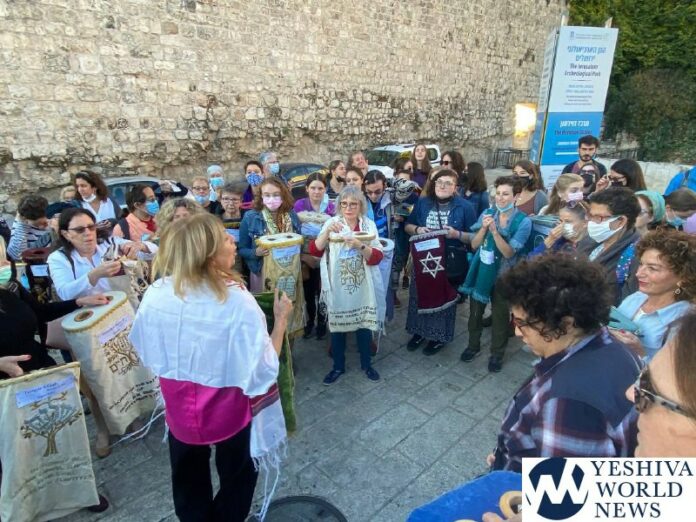 Hundreds of religious people came to the Kosel on Friday morning for Tefillas Shacharis of Rosh Chodesh Kislev to protest the planned provocation of Reform Labor MK Gilad Kariv and the Women of the Wall group.

Dozens of religious MKs were planning on physically blocking Kariv from repeating what he did last month – using his immunity to smuggle a Sefer Torah into the women’s section of the Kosel and reading it in a mixed group. However, President Yitzchak Herzog intervened on Thursday and sent a letter to Kariv and Blue and White MK Alon Tal, who also planned on attending, asking them not to come to the Kosel in order “to prevent conflict and unnecessary sinas chinam between elected public officials in front of the remnant of our Beis Hamikdash.”

Herzog also promised to do his best to meet the Reform groups’ demands for “equality” at the Kosel, although an egalitarian section of the Kosel designated for Reform groups is available but is almost always completely empty.

The religious MKs canceled their visit after Kariv and Tal agreed not to show up. It’s possible that the fact that all MKs have just spent two sleepless nights debating the passing of the budget in the Knesset plenum influenced their decision.

Hundreds of police officers were at the Kosel on Friday morning as the Women of the Wall showed up for their usual provocations and antics. They held a “protest” against the regulations at the Kosel by marching while holding empty Torah coverings to symbolize the “discrimination” against women at the site. Scuffles broke out between the WOW members, protesters and the police.

Women of the Wall director Anat Hoffman was removed from the area after she tried smuggling a Sefer Torah into the woman’s section, which is against the law.