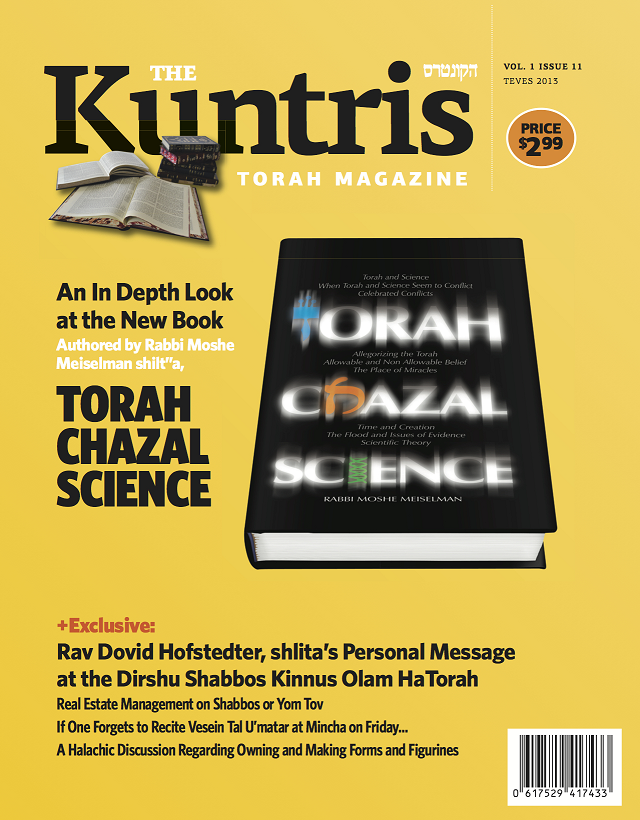 The Torah, in all its aspects, is perfect and complete; “Toras Hashem temimah.” It does not have to bend or comply with any other system on the planet. In fact, since the Torah is the “blueprint” according to which the universe was created, other systems should be judged by their agreement with the Torah! Rabbi Meiselman notes that in recent years, many unqualified authors took the liberty of challenging the classic Mesorah of the Torah to accommodate the views of modern science. In their view, Chazal took a back seat to the scientific theories of today. Many of these authors have introduced a radical new theology and have proclaimed that it is the classic Jewish belief. This ultimately caused much controversy over the legitimacy of the Torah. There is one area in which sophisticated scientists and Torah scholars are in complete agreement — that is with respect to amateur attempts to “make peace” between them. The methodologies of both science and halachah demand precision in the formulation and application of their respective principles. Consequently, both scientists and Torah scholars bristle when amateurs make assertions about their areas of expertise based on superficial contact with the sources.  It is for this reason that Rabbi Meiselman found it impossible to remain silent.

Rabbi Meiselman is one of the select few in our times who are qualified to write about the delicate topic of Torah and science. Rabbi Meiselman was trained by outstanding academicians in a variety of disciplines — mathematics, philosophy and several of the natural sciences. Most importantly, however, he had unlimited access to his uncle and rebbi, Rav Yosef Dov HaLevi Soloveitchik zt”l, who guided him in attaining a profound, thorough and Torah-true perspective on this topic. When reading this book, one will immediately notice the unique combination of vast Torah knowledge and extensive understanding of science from a sophisticated point of view, which is brought to bear in this book.

One of the crucial aspects of our belief is that the Torah that we have was given by Hashem on Har Sinai and does not contain mistakes. The Torah is not a “primitive document,” and everything that the Torah describes is absolutely emes. Additionally, our Mesorah of Torah Shebaal Peh is completely accurate. Therefore to suggest that Chazal are full of mistakes has the potential to undermine the authenticity of our Mesorah.

The radical new literature has disturbed many; while countless others, oblivious to its danger, warmly embraced its new ideas. Those aware of its danger have voiced their concern; while numerous others seem content with its unique approach. It is for both of these camps that this book was written. Both those who have been eagerly awaiting a proper response, and those unaware of the need for one, can be satisfied with the sophisticated level of scientific expertise, coupled with a proficiency in Torah, apparent in this work. It is my opinion that this book has the ability to unite Klal Yisroel on these matters.

The confusion caused by the encounter with secular culture and science must be dealt with. It is not incumbent on anyone to give up the study of science and the attendant pleasures of exploration and discovery. Science can be studied and enjoyed, provided that one knows its proper sphere. Rabbi Meiselman feels that the correct way to deal with the confusion is by allowing the true beauty and sophistication of the Torah to shine forth. We can no longer afford to give our tacit approval to the sophomoric literature that has been allowed to proliferate until now. They must be replaced by more mature and authentic writings.

Through reading this book, one will strengthen his appreciation for the infinite wisdom of the Torah and of Chazal. One will notice the manner in which Rabbi Meiselman humbly explains numerous Gemaras and other statements of Chazal portraying an awesome (and required) reverence for the incredible golden minds represented in Torah shebaal peh, and throughout our Mesorah. By the time one has concluded this book, one will have come to the proud realization that in fact, “Toras Hashem temimah.”