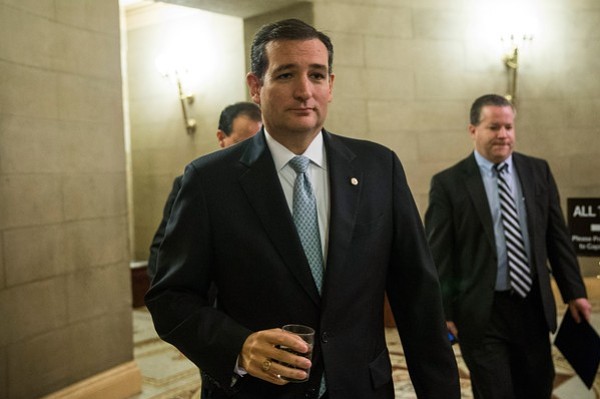 While Barack Obama extended his hand, Ted Cruz turned his back.

The Cuban-American U.S. Senator from Texas traveled to South Africa as part of a congressional delegation to attend Nelson Mandela’s memorial service on Tuesday. In contrast to President Obama, who made headlines for greeting Cuban head of state Raúl Castro with a handshake, Cruz walked out of the ceremony when Castro’s turn came to speak, ABC News reports.

“Sen. Cruz very much hopes that Castro learns the lessons of Nelson Mandela,” Cruz spokeswoman Catherine Frazier told ABC News. “For decades, Castro has wrongly imprisoned and tortured countless innocents. Just as Mandela was released after 27 years in prison, Castro should finally release his political prisoners. He should hold free elections, and once and for all, set the Cuban people free.”

CNN noted that Castro’s speech would be a “challenging moment” for the senator, whose father emigrated from Cuba at age 18 in the 1950s, shortly before Cuban dictator Fidel Castro came to power. Like most Cuban exiles who left around those years, Cruz’s father is a dogged critic of the Cuban government.

It’s doubtful that Mandela himself would have shared Cruz’s interpretation. The South African leader was a loyal supporter of the Castros and the Cuban Revolution, in part because of Cuba’s strong opposition to Apartheid.

The Cuban-American community in South Florida harshly criticized Mandela in the 1990s for his friendship with Fidel Castro, but Ted Cruz did not seem to share their perspective.

“Nelson Mandela will live in history as an inspiration for defenders of liberty around the globe,” Cruz said in a Facebook posting last week.