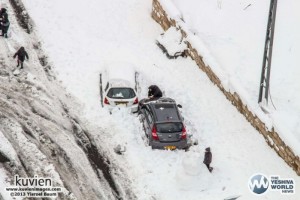 While Yerushalayim is returning to normal following the unprecedented blizzard that left almost 30,000 homes with electricity for days, Tzfas cannot say the same. The situation in the northern city a week after the snowfall began is being described as “catastrophic”. Many areas of the city have 1 meter (39 inches) snow accumulations and residents are still feeling the impact of the storm.

It is clear to all that most of the focus of the storm was on Yerushalayim, while other areas including Tzfas, Yehuda, Shomron and the Golan Heights were less of a priority.

Tzfas City Hall officials reported late Wednesday night the eve of 16 Teves 5774 that dozens of schools and kindergartens would not open on Thursday since there are safety hazards resulting from the storm that haven’t been corrected. The Orot Mordechai School sustained irreparable damage sand the city is now faced with finding a new location for those students to learn.

Tzfas Mayor Ilan Shochat told Israel Radio on Thursday morning “we are trying to revive the city. Once upon a time I enjoyed snow but today, I don’t want to see any snow in my life.” Shochat explained the most difficult period was the first 72 hours during which many residents were without power and having to endure the frigid conditions.

The mayor explains that the city does not have salt plows because it is not cost effective since usually, the snow is an issue for a day or two annually, no more. “We have done everything that we possibly can but this storm was a natural disaster, the magnitude of which has not been seen for over 100 years. This surpasses the worst case scenario of planning for emergencies” the mayor explained.

The mayor was full of praise for the IDF, which sent six armored personnel carriers, a company of Golani Brigade soldiers, and other manpower and equipment. “You probably did not hear too much about this as everyone was focused on Jerusalem” the mayor added.

City officials continue to meet every four hours to update one another as 1,200 volunteers; contractors, engineers and other professionals seek to rebuild the city.

The mayor describes his city as “one that was hit by a tsunami”. Damage includes the collapse of many rooftops under the weight of the snow, bus stops ripped out of place, downed trees, and major potholes in roads. The mayor explains there are countless trees downed, many striking homes and yards and the continue blocking streets.

“We are still in a state of emergency and I am angered to hear about launching an investigation and so-forth. We must first assist Tzfas to get out of the storm” Shochat insists.

Shochat cited the city’s chareidi population numbers 27% of Tzfas’ residents. He feels for them it was “easier” to some extent since they are used to being without telephones, internet, Facebook and email every Shabbos so they did not panic. The mayor added the city’s rabbonim stepped forward and gave a heter to continue all rescue work on Shabbos, realizing the magnitude of the disaster that struck the city.