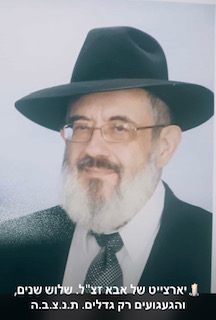 Today is the third yartzeit of Rav Avrohom Dovid Oppen, alav hashalom.  He  was a remarkable mechanech who had an enormous impact on three different types of talmidim throughout his life:  Mesivta bochurim and Yeshivaleit in the Telze Yeshiva, yeshiva students with Rabbi Berel Wein in Monsey, and seminary girls in Machon Devorah Seminary in Yerushalayim – the seminary that he had started.

Rabbi Oppen was very close to Reb Mottel of Telze, (Rav Chaim Mordechai Katz 1894-1964) establish his mesivta and taught bochrim since he was very young.

After that, he assisted Rabbi Berel Wein in establishing his Yeshiva in Monsey, Shaarei Torah.

After that, Rav Oppen moved to Eretz Yisroel and established the Machon Devorah Seminary where, for many decades, he taught and helped form many Bais Yaakov students.  There are many hundreds of these talmidos of Rav Oppen that are now chashuva imahos in Klal Yisroel.  Their children are in top kollelim throughout the world, they are mechanchim and Rabbonim and leading businessmen.

Throughout his chinuch career he profoundly affected thousands and thousands of talmidim.  Below is a thought that this author had heard from him some thirty-five years ago.

Emunas Chachomim is a powerful idea and there is a fascinating machlokes as to its nature.  There is a debate between the Sefer HaChinuch and the Ramban as to how we understand the concept of “even if they tell you that right is left and left is right.”

The Ramban says that even if they tell you that right is left you must listen – because they are correct.  The Sefer HaChinuch explains that it is a protocol that we must follow – because, otherwise it would be impossible to function effectively as a nation.  Just as an army cannot function with every soldier second-guessing the commands he receives – so too must we realize that Klal Yisroel needs to follow its Torah leaders.

It worked out that today, on his third yartzeit, was the bris of a great-grandson of Rabbi Oppen.  He was named, “Avrohom Dovid.”