In an article published in The Jerusalem Post on Yom Ha’atzmaut and published in Hebrew in Yediot Achronot on Monday morning, Jonathan Pollard, who paid a heavy price for Israel’s security, broke his silence in an article entitled: “Israel’s War For Independence Is Far From Over.”

“During the 30 years I was in prison, I lived with incredible fear and concern for my life, ” Pollard wrote. “I had to have eyes in the back of my head. I couldn’t sleep at night, concerned that someone would enter my room and stab me or my roommate to death. I needed to always carry a knife and be prepared to use it without hesitation.

“I constantly had to witness the horrible deaths of other people – especially my friends – that occurred suddenly and without warning. In prison, the most frustrating thing of all had to do with the fact that the officials in charge of protecting us were basically scared of the violent prisoners and accommodated them as much as possible.

“Put plainly, our administrators wanted peace at any cost, even if it meant that innocent people were murdered without serious consequences to those who attacked them. We couldn’t even rely upon the guards to protect us, because they didn’t want an inmate injured by them taking them to court.

“I quickly learned that we didn’t have a right to self-defense under any circumstances. People can’t believe me when I tell them that we were always wrong if we tried to defend ourselves. And those who did were always punished excessively in order to make the point that they were no better than their assailants. It was total insanity.

“I prayed that when I came home, I wouldn’t have to live this way. I was wrong. Indeed, given what I’ve seen over the past year, it’s even worse now for me, because this time it’s not about one or two people getting randomly killed, but about an entire nation being traumatized by an army of cold-blooded antisemitic psychopaths, who the authorities are afraid of provoking. I’ve seen this movie before, and it never ends well.

“In prison, I had one or two good friends who watched my back and I watched theirs. I lived under G-d’s grace and tried to remember that you fear no one but G-d, and to strike first. Here, incredibly, I’m living with a whole country that is either scared to death or in denial.

“WE ARE all suffering on account of a group of intellectually challenged political and judicial elites, who have an infinite capacity to tolerate the suffering of our citizens, all the while insinuating that we are somehow responsible for all the violence we are experiencing.

“I’m tired of this. I’m tired of seeing our so-called leaders taking our flag, washing out the blue and only leaving the white of surrender.

“I’m waiting for somebody, a leader, a true Jewish leader, to come forward and put the blue stripes and the Magen Dovid back on our flag.

“I’m waiting for a leader who will act without any concern about what anybody else outside our country thinks – whether it be the United States or the European Union, the UN, or anybody else who believes they can tell us where we can live or how we are to defend ourselves.

“I’ve spent 30 years in prison hoping and praying that I would come home to a state that would defend me. Was I wrong? It certainly feels that way.

“We desperately need to get rid of this galut (exile) mentality that prioritizes the need to understand our enemies over the security of our people. We simply can’t think like the ten spies, who attributed to others what they felt about themselves – namely, that they were like grasshoppers. Well, I’m not a grasshopper, and neither are my brothers or sisters in this country.

“We are the descendants of proud and noble warriors, who feared only G-d and never hesitated to defend our land from some of the greatest empires the world has ever seen. But over many years, our leaders have relentlessly tried to have us forget this fact in favor of our adopting a more liberal post-modernism, where we share our land with those who openly seek to destroy us. No more! We must reject this type of cynical defeatism before it kills us.

“I know we can enact these essential reforms – and if we actually want to be an independent country, we have no other choice. Indeed, these goals should be seen as sacred obligations we must embrace not only for our sake, but also for the sake of our future generations. May G-d grant us the wisdom and strength to do so. 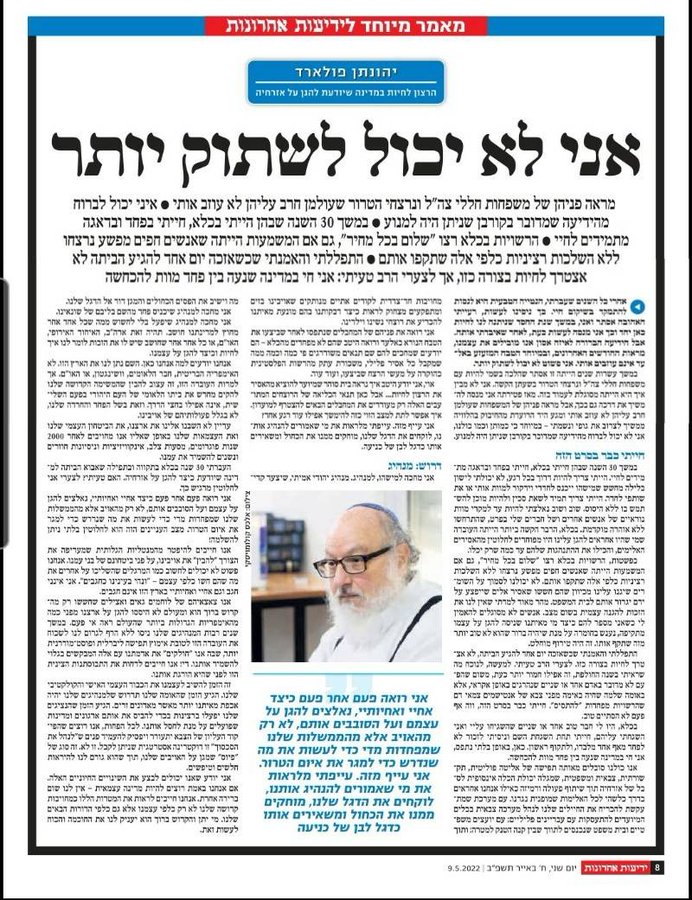