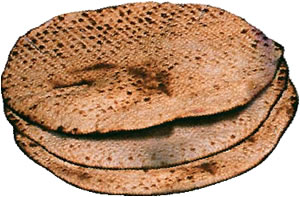 Should we do it during all three?  It should also be noted that the Chazon ish zt”l held that it should not be done at all, because it is adding on to the Torah (See Orchos Rabbeinu Vol. II p. 97). Rav Chaim Kanievsky zatzal followed his father’s view to eat it.

It seems that there are a number of customs.  Rav Shreya Dublitzky ate it on the night of the fifteenth (HaMevaser HaTorani, Parshas Emor 5772 p. 3)  Rav Yisroel Dovid Harfenes shlita, one of the leading Poskim in Williamsburg recommends doing it both on the 14th after Chatzos and in the evening of the 15th (See Teshuvos Mekadaish Yisroel Sfiras HaOmer #93).  If it is difficult for him to wash twice – then he should do it right before shkiya on the 14th.  I am informed that the Lubavitcher Rebbe said to do it all three times.

The truth is that most people eat it, whenever they are reminded about it.

And while we contemplate this question, there is an internal message of Pesach Sheni – that we should not miss.

It is a message brought out by the Gerrer Rebbe – the author of the Chidushei HaRim. Rav Yitzchok Meir Alter (1799-1866) was the very first Gerrer Rebbe.

He writes that this particular day, Pesach Sheni, is a tikun for those who are perceived as beyond the pale – “B’derech Rechokah” – in his words. They are outside the scope of assistance. To them, to those who could not develop the closeness and Dveikus to Hashem that was emblematic of Pesach – is this second chance.

The Psukim in Bahaaloscha tell us: There were men who were impure of the dead, and therefore, could not make the Pesach Korban on that day. They approached Moshe and Aharon on that day. Those men said to him, “We are impure [because of contact] with a dead person; [but] why should we be excluded so as not to bring the offering of Hashemin its appointed time, with all the children of Israel? Moshe said to them, “Imdu – Wait, and I will hear what Hashem instructs concerning you.”

A NEW MEANING FOR IMDU

The Chidushei HaRim writes that Imdu does not mean wait – but rather it means imdu in Teshuvah and Tefillah. It is not too late, just stand and pursue these two Avodahs and Hashem will help you along the way.

The Chidushei HaRim writes that this is the day for the off-the-derech kids that are now in every single one of our communities.

Each community among us, whether it be chassidisha, litvisha, or modern orthodox, has children that have left the fold.

Those that the Chiddushei HaRim refers to have issues of self-esteem, serious alcohol consumption, and many are abusing drugs. Many OTD kids have tattoos and multiple piercings.

They are everywhere, And their parents toss and turn at night worrying about them.

It is to the point where, to echo a Pesach theme – “ain bayis asher ain bo mais – There is not a home that has not been affected.”

We must conceive of not merely a stop-gap measure, but something more. We must research what the largest risk factors are. We must develop and innovate programs, plans and ideas that will reduce these risk factors. We need to put our collective minds and our financial pocket books together. Torah society needs a comprehensive solution to address this ever widening problem.

Indeed, the Sefer Chasidim (308) explains that even if there is significant financial strain we need to create separate institutions for our different types of children.

True, there are the Rabbi Tzvi Glucks, the Rabbi Silvers, the Rabbi Yaakov Horowitzs, the TOVA mentoring programs. But we need to support them and replicate what they do on a massive, massive scale.

A Sefer called “Cords of Love” was published last year in lashon Hakodesh, reflecting Rav Matisyahu Salomon’s thoughts and guidance on the matter.  His main message is that this is a manifestation of the galus, but that we should show our unconditional love to those who are struggling.

But more needs to be done.

How can we not cry for thousands of holy mothers in Klal Yisroel whose every thought and prayer centers around her lost son or daughter?

And time is ticking. Let’s not kid ourselves. One or two years in the off-the derech lifestyle almost guarantees a point of no return. Those that do make the trip back are few and far between.

We can all do something. We can create happier homes and happier classrooms. We need to reach out to the people we see and smile at them. Of course, there are a myriad of reasons as to why these things can happen, and we cannot chalilah ever be judgmental.

We need to be that resource, that Rock-of-Gibraltar that genuinely cares about the neighbor’s child who has that missing or divorced parent.

We need to put our collective heads together to create tools, resources, and institutions that will address the issue of our ever-growing lost brethren. This all needs leadership, direction, and vision.

These forgotten souls must be placed once again on our agenda. That is the theme of Pesach Sheni, according to the Gerrer Rebbe. Let’s listen to its message.