As the coalition teeters on its last legs and new elections loom, Prime Minister Naftali Bennett is changing his tactics, swiveling from his recently adopted centrist position back to his past right-wing positions.

Bennett, the former head of the Yesha Council (an umbrella organization of local authorities in Yehudah, Shomron, and the Jordan Valley) had not visited one community in Yehudah and Shomron since he began serving as prime minister. That changed in the past two days when he visited Elkana in the Shomron on Tuesday and Keida in Binyamin on Wednesday.

Bennett was not welcomed with open arms. Almost 600 people signed a petition before his visit to Elkanah demanding that it be canceled. His visit wasn’t canceled but he was greeted by dozens of protesters.

On Wednesday, Bennett traveled to Keida to pay a shiva visit to the family of fallen police commando, Sgt. Maj. Noam Raz, h’yd, who was murdered on Friday during a gun battle in Jenin, leaving behind a wife and six sons.

It was the first shiva visit that Bennett made to any of the families who lost loved ones in the recent wave of terror attacks. Bennett was greeted there by protesters as well who yelled that he should resign and that he isn’t wanted in Yehudah and Shomron.

The niftar’s bechor, 17-year-old Be’eri, had harsh words for Bennett, telling him: “I don’t know how you look at yourself in the mirror. I blame you just as much as I blame the terrorist. You don’t deserve to be in the house that my father lived in.” 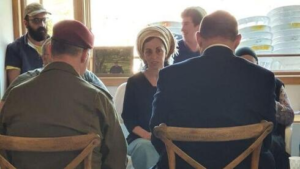 Be’eri said that his father was killed due to the government’s decision not to target terrorists in Jenin with missiles, endangering soldiers and Border Police officers instead.

“You took a wounded terrorist to an Israeli hospital but my father didn’t make it there,” he added.

Raz’s wife also slammed Bennett for stealing the votes of those who voted for him due to his avowed support of settlements.

Opposition leader Binyamin Netanyahu, who was menachem avel almost all the families of the recent terror victims, paid a shiva visit to the Raz family a few hours later and was warmly greeted by family members. 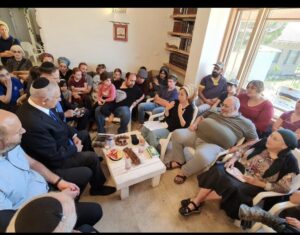 Netanyahu even accompanied one of the sons to tour an olive grove that his father, z’tl, planted.