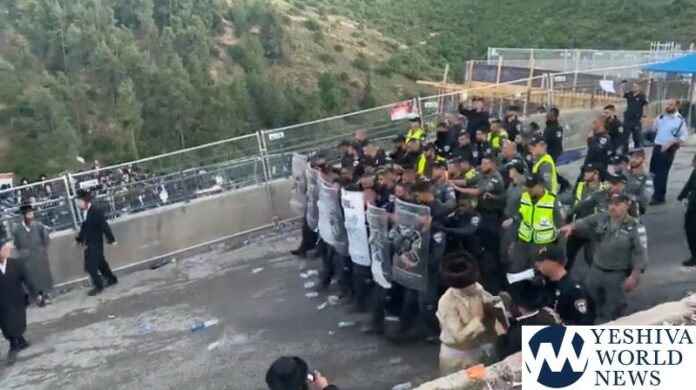 Seeing the images and videos coming out of Meron today was shocking, to say the least. Exactly a year to the day from when 45 precious neshamos were torn away from us – men and children in the prime of their lives – we saw the ugly lack of kavod zeh lazeh that led to the deaths of Rabi Akiva’s 24,000 students.

The blame doesn’t lie on one side or the other; everyone involved should be ashamed of themselves.

The Israeli police treated attendees like utter trash. For a full year, they supposedly made preparations to allow the Lag B’Omer festivities to continue at the kever of Rabi Shimon bar Yochai, yet thousands of people were held for hours in parking lots without access to food, water, or drink. Barely any davening was allowed at the kever itself, with police practically making visitors run through the tziyon. Police beat people left and right, even purposely lifting people and dropping them on their heads. They acted like barbaric thugs. Apparently, the only thing that was prepared was to destroy any semblance of the happiness and joy that existed in Meron in years past.

On the other side, there were far too many people who engaged in sickening acts, from attempted sabotage of the celebrations to outright flaunting of any of the implemented security procedures. Is it upsetting that fewer people were allowed to go to Meron this year? Of course. Is it frustrating that the celebrations are much more toned down and smaller? Sure. Is it fair to assume that the government was not only trying to make the festivities safer, but also overdoing the safety regulations? It is. But your anger and frustration doesn’t give you license to act like an animal. It doesn’t give you the right to ignore the fact that just one year ago, 45 people were asphyxiated to death because of overcrowding, and that new safety measures were necessary.

Everyone in Meron this year, whether they were involved in what occurred there or not, should be walking around ashamed and with their heads held low. What we saw was nothing short of appalling and disgraceful.

Last year, we were all one, united in the terrible anguish of the loss of the 45 victims. This year, we are back at each other’s throats, tearing each other’s hair out. And for that, we should all be angry and chagrined. It’s horrible that seemingly only tragedy – not joyous celebration – can bring us all together.