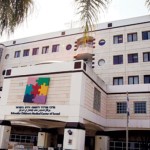 The Gross children, who are in serious condition as a result of prolonged inhalation of a phosphorus based pesticide were transported from Shaare Zedek Medical Center in Yerushalayim to Schneider Children’s Hospital in Petach Tikvah on Wednesday evening, 21 Shevat 5774.

Officials are Shaare Zedek realized that the two children fighting for their lives would receive the best care in Schneider. Due to their very serious and unstable medical condition doctors realized they needed to be connected to ECMO machines during transport to maintain their life functions. It appears the inhalation of the poison has seriously compromised the integrity of their cardiac and pulmonary muscles, now fighting to keep their frail bodies alive.

An ECMO (Extracorporeal Membrane Oxygenation) is used only after medicine and a ventilator have failed to improve a patient’s condition. An ECMO machine works for the heart and lungs. It is the same heart/lung machine used for open-heart surgery. When one is placed on ECMO, blood will flow through the ECMO tubing where it receives oxygen from the machine’s lung. This happens until the heart and/or lungs are able to work on their own.

When arrangements were being made for the critical transport doctors at Schneider realized they only have one ECMO and it was in use. Another unit was at Beilinson, and it too was in use.

Schneider’s Chief of ICU Medicine Dr. Ovdei Dagan and Schneider Deputy Medical Director Dr. Efrat Baron-Harlev realized time is critical. They did not hesitate, ordering two new ECMO units from the distributer. The units were placed on a Magen David Adom mobile intensive care unit and preparations for the transport were underway.

Simultaneously, doctors were becoming increasingly concerned regarding the condition of the father, Shimon, who was beginning to deteriorate. He developed shortness of breath and began vomiting. A few hours later doctors determined his condition was stabilizing as a result of an adult’s larger body mass, capable of absorbing the poisonous substance far better than the small children. At 22:30 Michal was at Shimon’s bedside at the young parents simply stared at one another, sunken eyes, trying to remain optimistic regarding the condition of their sons. They both began crying; realizing that the day was so difficult that did not even have time to mourn their loss of their daughters until now.

Family friends arranged for tefilos at the Kosel and many attended the event on Wednesday night, being mispallel for the children and their parents, all in need of a refuah.

Shimie (Shimon) learns in the Mir cousin Yisrael Glick explains, citing the family has yichus of 10 generations in Yerushalayim. He describes Michal and Shimie as “warm and down to earth people, marvelous parents”. Yisrael explained the entire extended family is destroyed as a result of the day’s horrific events. “We cannot possibly understand what has occurred and why, and we dont ask. We are religious people and we don’t ask such questions” he concluded.

Family members are calling on Am Yisrael to be mispallel for them;
חיים מיכאל שלמה בן מיכל
רפאל יצחק אייזק בן מיכל