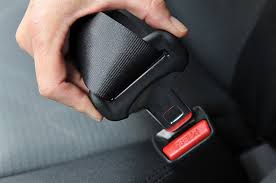 A new driver just got her license and was driving two friends to the mall. Not sure of where to turn, her driving appeared somewhat erratic and she was soon pulled over. The police officer ticketed her but not for the erratic driving. Her front passenger was not wearing a seatbelt.

What is the halacha? Does the passenger have to pay the cost of the ticket or can she leave it up to the driver?

Before we address this issue, it should be known that all Poskim who address the halachos of seatbelts rule that wearing them is an out and out halachic obligation (See Shaivet HaKhasi Vol. V #241, Menuchas Emes, by Rav Mordechai Gross, Vol. IV #10, Responsa Nuta Gavriel, oral ruling of Debreciner Rav z”l to this author, and Nesivos Chaim by Rav Asher Zelig Mirsky Shaar #2 who cites the aforementioned Poskim). The obligation appears to be a biblical one predicated upon the verse, “venishmartem me’od bnafshosaichem – And you shall be very careful regarding yourselves (Dvarim 4:9).” Indeed, it is even a Mitzvah for the driver to command to all his passengers, both seated in the front and back to put on their seatbelts (Shaivet HaKhasi).

Statistically, if someone makes sure to always wear a seat belt, one can reduce the chance of dying by 54%. What is perhaps a shocker is that passengers that do not wear seat belts in the back seat actually cause additional risks to those who are travelling in the front seat. There is a five hindred percent increase in deaths to the front passenger when the back passenger does not wear a seat belt.

Getting back to our case, Rav Mordechai Gross rules that the ticket is actually the driver’s obligation because she should have told the passenger to put on her seatbelt. Even though the driver may have done so, but the passenger refused, the driver always had the option of not continuing to drive until the passenger put on the seatbelt.

What if the passenger told the driver, that she would pay for any ticket received? Believe it or not, this is a somewhat complicated question.

We know that in secular contract law there is a concept called “consideration.” A contract is not legally valid unless both sides receive something of value, either money or the item that is being contracted to receive. Here, while there is certainly a moral obligation to fulfill one’s words – there does not seem to be a legal obligation, at first glance, on the part of the passenger to pick up the cost of the ticket.

In halacha, there is a similar notion called “asmachta lo kanya” just saying something does not cause a legal transaction to take place (See Shulchan Aruch Choshain Mishpat 207:11).

It would seem from here that although it would be a rather shabby thing to do, the passenger could get out of her financial obligation to pay for the seatbelt ticket.

But things are not so simple. Both the Shach and Sma rule earlier (CM 61:12) that if a borrower told the lender orally that he would pick up all the costs that the lender incurred in loaning him the money, this is not counted as “asmachta” but rather the borrower is fully obligated in paying what he had agreed to pay. The explanation is that this statement has become part of the condition of the monetary arrangement and is not a stand-alone issue.

We should also note that response of the passenger to the driver that she would pay for the ticket was incorrect as well. The Mitzvah of wearing a seat belt is not just limited to “veNishmartem” (Dvarim 4:9). The verse later on (Dvarim 4:15), “Rak hishamer lecha” is understood by most Poskim to actually comprise a second Mitzvah (See Rav Chaim Kanievsky Shlita Shaar HaTeshuvos #25). There is also a third Mitzvah, “V’Chai Bahem – And you shall live by them” (VaYikra 18:5).

The Ben Ish Chai writes that a person should make every effort to ensure the general safety of both himself and those around him (Parshas Pinchas year cycle #2). The Turei Zahav in his commentary to Choshain Mishpat (427:10) cites a Midrash on Shir HaShirim that when one does this and protects himself from dangers and damage not only is he protected, but he receives extraordinary credit for the Mitzvah too.