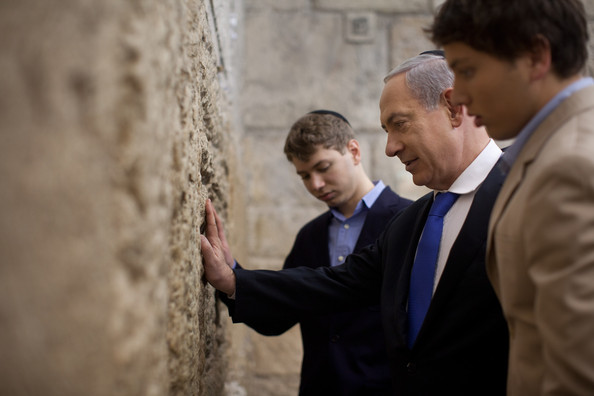 While attending the World Economic Summit in Davos, one of the sideline meetings conducted by Prime Minister Binyamin was with Norwegian Prime Minister Erna Solberg. Proud of his son Yair, Mr. Netanyahu used the meeting to share some private news with the prime minister, that Yair was dating Sandra Leikanger, a Norwegian national. Yair, 23, has already traveled with her to Norway during the summer and the relationship continues. The Norwegian daily Dagen reported she met the prime minister’s son while studying in the Interdisciplinary Center in Herzliya, where he too is studying and it appears that fact that she is not Jewish does not trouble the young Netanyahu.

While the prime minister appears pleased to share the news, that his son is seriously dating a shiksa, Dr. Chaggai Ben-Artzi, Sara Netanyahu’s brother has a different viewpoint regarding the relationship. Ben-Artzi, who is Shomer Torah and Mitzvos, did not attempt to hide his anger over his nephew’s relationship. “Are you crazy” he asked when learning of the couple, adding he will not permit the young lady to come near the kevarim of his late parents. He added that if his parents knew of what their grandson was doing it would not be received well to put it mildly. He added that if Yair does not break it off and “does this thing then his is spitting on the kevarim of his grandparents. They loved him so much and raised him. From now on he will not have the zechus to stand at their kevarim and say how much he loves them.”

Ben-Artzi continues; “If you love them, this demands breaking it off immediately. Do we lack suitable women among your own people? You have to go to the daughters of the Plishtim! Have you gone crazy? This is beyond comprehension”.

Ben-Artzi adds that if he does not break it off, then he will personally see to it that Yair does not approach the kevarim of his parents on their yahrzeit when the annual memorial is held. He explains his father was very clear on the matter of assimilation and there is no room here for leniency. Ben-Artzi tells how his father, who was also the father of Yair’s mother, Mrs. Netanyahu, was adamant and he said assimilation was “the absolute worst thing that one can do, even worse than leaving Israel”.

Ben-Artzi stated adds his father always said if one of the family members would intermarry he would go out into the streets shouting and pull his hair out, “and here Yair is doing just that” he concluded.