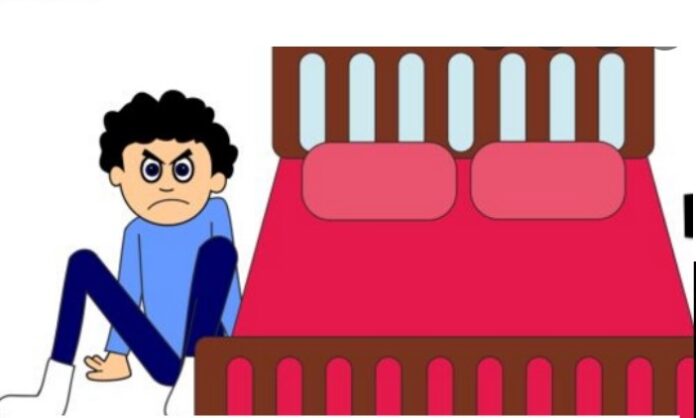 You woke up on what is called, “the wrong side of the bed.”  Is it forbidden to remain in this state?  Are we obligated to go through specific thought processes to “get out of it?”  Is it a Mitzvah to do so?  Is the song, “Mitzvah Gedolah lihios b’Simcha tamid – It is a great Mitzvah to be in a state of constant joy” really true?  If so, where does it come from?  What are the factors that cause us to wake up on the wrong side of the bed and what can we do about it?

Let’s begin with an illustration.  You were up half of the night because of various noises.  You wash negel vasser and somehow, the water had spilled.  You got to the bathroom and it is locked.  You wonder why that is and you discover that no one is in there.  You trip on the floor because someone left something there that shouldn’t have been there.   Today, it seems, is just not your day.

But does it have to be this way?  Is there anything that we can do to change it up?  Also, what is the halacha regarding this whole thing?

THE VIEW OF THE BERDITCHEVER

The Berditchever in the beginning of Parshas Vayaishev (in his Kedushas HaLevi) does extend it to always being in such a state – but he writes that it is only when he perceives that Klal Yisroel has good in this world.  Otherwise, he writes, a person is obligated to partake in their sorrow.   According to him, we must get out of this negative state of mind, unless we are partaking in the sorrow of Klal Yisroel.

There is also a concept in Pirkei Avos (4:1) of “who is wealthy?  – hasame’ach b’chelko – being happy with one’s lot in life” – but this may not necessarily mean that this means that one must constantly be in a state of happiness.  The Menoras HaMeor (chapter 14) writes that whomsoever is happy with his or her lot is in a constant state of happiness – but once again, this does not mean that it is a Mitzvah per se.  It could be that it is a reward.

This author is of the opinion that the idea is first found only in Chassidishe seforim, and that it may have been initially introduced as an effective counter-measure to the debilitating effects of depression.  When one is depressed the shechina does not reside in him.  The Noam Elimelech on Parshas BaMidbar explains that the Torah tells us that one must be in an Ohel Mo’ed in the tent of a Yom Tov – i.e. in a state of happiness – in order that one have the Shechina be with him.

In a similar vein, Rav Tzvi Hirsch of Nadvorna, a prime student of the Maggid of Mezerich writes in his Alpha Beita (simcha) that one should be in a constant state of Simcha in order to always be able to perform his Mitzvos, his learning, and his Tefillah in a state of joy and zrizus – alacrity.  In other words, it is kind of a hechsher Mitzvah but he did not state per se that it is a full Mitzvah, much less a Mitzvah Gedolah.

The expression as we know it originates with Rav Nachman of Breslov (1772-1810) in his Likkutei Moharan 2:24).    This author would like to suggest perhaps an alternative understanding of Rav Nachman of Breslov’s formulation that does not contradict the fact that we do not find earlier mention of the idea.

But before this, a brief overview is in order. During Rav Nachman of Breslov’s times, sadness filled the air.  Disease, hunger, famine, and poverty were everywhere.  Indeed, both Rav Nachman’s wife and he, himself, died of Tuberculosis at a very young age.  Rav Nachman of Uman passed away at 38 years of age.

Being in a state of depression also depresses other people.  Being in a state of happiness cheers people up (within reason, of course).  Cheering and uplifting the spirit of others is a Mitzvah of v’ahavta l’rayacha kamocha – loving your neighbor as yourself.  Rabbi Akiva says that this is a Klal gadol baTorah – a great principle in the Torah.   Being in a constant state of happiness allows us to perform the Mitzvah of v’ahavta l’rayacha kamocha in a flash – especially during dark times. We must keep in mind that it is always proper to try and cheer up and uplift others.

So what are the contributing factors to waking up on the wrong side of the bed?

WHAT CAN BE DONE

Although it can be difficult to overcome, the following are some suggestions that people find to be helpful.

The author can be reach at [email protected]