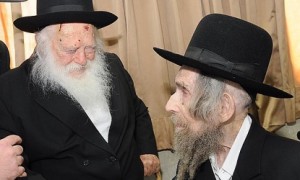 HaGaon HaRav Chaim Kanievsky Shlita was asked why so many tzoros have befallen Am Yisrael of late, to which the rav is quoted saying “Until Moshiach arrives there will be tzoros but the tragedies of late are the result of insulting Gedolei Yisrael.

Kikar Shabbos reports that the rav was asked on Tuesday night the eve of 28 Shevat 5774 by one of the people close to him why so many tragedies have befallen the community of late. He explained to the rav of the petira of young avreichim, the gas explosion in Gilo, and the pesticide incident striking the Gross family.

The rav during the past months has spoken out numerous times of the lack of derech eretz towards Gedolei Yisrael, first and foremost Maran HaGaon HaRav Aaron Yehuda Leib Shteinman Shlita.