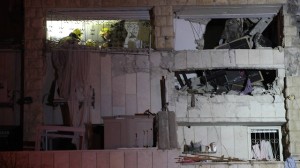 The powerful gas explosion that claimed four lives in the Gilo neighborhood of Yerushalayim was first believed to be the result of human error on the part of the Supergas Company technician.

Fire marshals have complemented their investigation into the fatal explosion on Shabtai Hanegbi Street, and they have determined that the technician did not cause the blast. They blame the blast on a gas valve that was mistakenly left open.

It has been determined that the gas valve that was left open was in the apartment of Linda Schwartz, 40, the last victim of the attack who died days later in a Hadassah Ein Kerem Hospital intensive care unit. Fire investigators refer to a gas valve that supplies gas for burners used for cooking. It appears the valve was opened unintentionally by opening a cabinet that should have housed burners. The cooking gas was flowing freely into the environment, leading to the explosion. Investigators believe the gas was flowing for four-to-five hours, adding fire marshals did not find a gas burner in the ruins of the apartment, which they feel permitted the gas to flow freely, setting the stage for the blast that rocked the neighborhood.

It was first believed that the technician was negligent for he arrived during the nighttime hours, checked and then closed the valve and explained he would return in the morning. The blast occurred after that visit.

Also killed in the blast were Mr. Avraham Tufan, his wife Galit and their son Yosef Chaim.