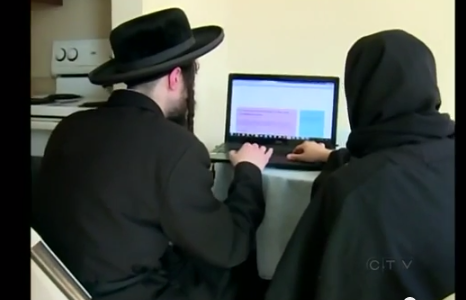 A mother in the Lev Tahor community who is the subject of a child protection proceeding sent a letter to media outlets decrying the actions of Chatham-Kent Children’s Services and calling out for help.

The letter also includes hundreds of pages of court documents filed in her case. The woman had two of her children temporarily removed after social workers discovered what they said was a bruise on the face of a child. She maintains it was permanent marker.

The children, a boy and a girl both under five years old, were kept in a foster home for five days and returned. The matter was briefly heard Friday where it was adjourned until April.

“I must cry out to just any one, please call the society and look for some human feeling at the society’s office and ask them please gave up the improper visits and withdraw your unjustified case against any innocent parents including Jewish devoted one,” reads the letter.

The Child and Family Services Act prevents the Star from identifying either the parents or the children. The letter was written without the consent or knowledge of the woman’s lawyer, Chris Knowles.

“I can tell you I had nothing to do with that. It’s unusual,” he said.

Quebec authorities have documented what they say is evidence of neglect, psychological abuse, poor dental and physical health among members of the community. An Ontario court will rule Monday on whether to enforce a Quebec order for the removal of 14 children.