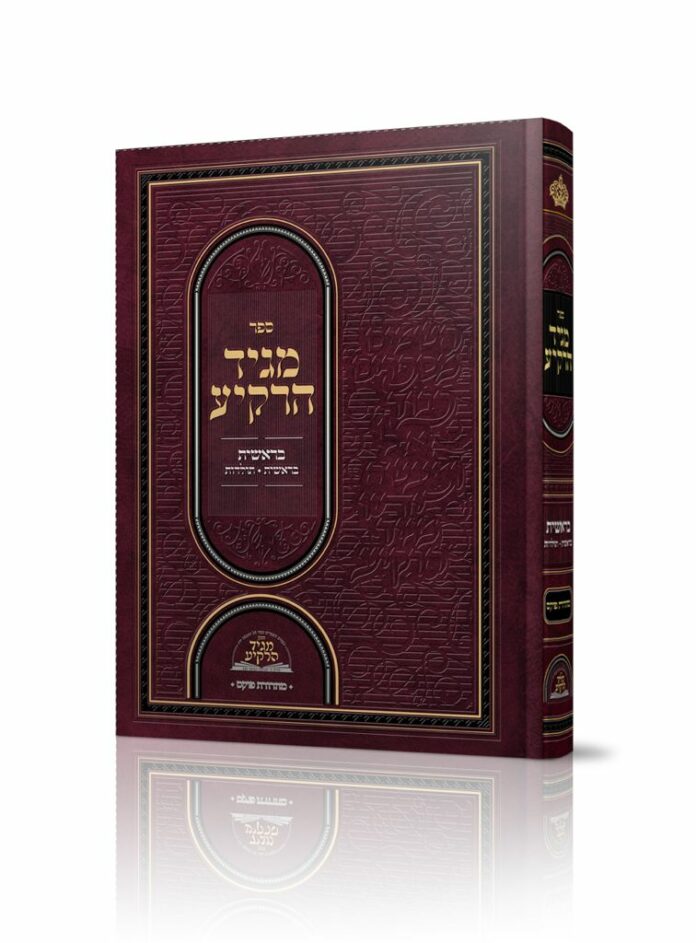 Rav Daniel Glatstein shlita and his seforim are a perfect portrait of what Torah machshavah is meant to be.  He demonstrates an uncanny ability to produce novel thoughts and ideas that you were unaware of previously, but when you see his sources – you wonder to yourself how it is that you never explored his idea before.  It is clearly and undeniably textually compelling within his sources. The insights were there plain as could be all along – we just missed them entirely, apparently.

With his previous seforim, we have seen how he brings to life the central motifs of each of the Yomim Tovim –  of Purim, Pesach, of the entire month of Nissan and its themes of Geulah.  And in these parshios of the beginning of Bereishis, we are treated similarly.

Rav Glatstein carefully walks us through sefer Bereishis  as he explains the nature of the battle of the four kings versus the five kings (Maamar 20). He begins with various discoveries, questions and or inconsistencies in the text.  Nimrod is mentioned first in the list of the four,  And then later, he is mentioned third.  He uncovers answers and through the answers we discover that Nimrod had a different agenda in his involvement in the war than did Chedorlaomer, king of Elam,  Chedorlaomer intended to build an empire and collect tributes.  Nimrod, however, joined the battle to disprove Avrohom’s philosophy – a battle he had had with him since putting him in the fiery pit.  Along the way, we discover what made Lot fall – it was his attraction to his possessions – a lesson we can all learn from.

In Maamar 25 we discover the very power of Zikui HaRabbim, something to which Rav Yisroel Salanter in his Kovno letters attributes as the only weapon capable of overcoming the Yetzer Harah itself.  We see how it informs and directs a mechanech’s success in Harbatzas HaTorah.  Rav Glatstein shows us a fascinating Chasam Sofer that we should place preference on the spiritual growth of others rather than solely on ourselves. He cites Rav Moshe Feinstein (Drash Moshe, Bereishis 11:32) as conveying the same message.

In maamar 28 we understand how it was the power of the Akeidah that achieved our ascendancy over Yishmael – permanently.  We discover a fascinating reading of the Gemorah in Makos where foxes emerge from the makom HaMikdash and Rabbi Akiva laughs.  Rabbi Glatstein draws a parallel in Gematria between Yishmaelim and Shualim.  [I would like to add my own addition to Rabbi Glatstein’s Gematriam with two questions and an answer.  1] Let’s remember that the Tannaim lived before the rise of Islam.  So how can the foxes allude to the Islamic mosques on Har HaBayis?   2] Also, isn’t shu’alim more in Gematria than yishmaelim?  The Gematrias do not seem to fit.  I believe the answer is that in Shir HaShirim chapter two – the word shualim appears in two spellings – one with the Vov and one without it.  The Rokeach explains that when it is written fully, it alludes to Edom – the Romans.  When it appears missing – it alludes to Yishmaelim. And there is now a correlation between Rome who destroyed our Makom HaMikdash and the Muslims who currently occupy it. And this is probably what Rav Glatstein had meant in his parallel]. Regardless, Rabbi Akiva is revealing to the Tannaim the future fall of the mosques on Har Habayis.  This is a very powerful insight and one that brings us nechama as well.

And finally one last thought and Maamar.  There is something called, “the parenting dilemma.”  Your child wants to stay out late at night with friends on a school night.  Refusing will mean one week of cold shoulder treatment from your child. Giving permission to go, you become the coolest parent around.  The parenting books advise – you are a parent not a friend.  Perhaps counter-intuitively, Rabbi Glatstein, in Maamar 37 explores the idea of parenting through friendship.  He highlights and differentiates between the speech patterns of Aisav and Yaakov Avinu.  He cites Rav Natan Adler. He then cites his student the Chasam Sofer, and then very soon and very quickly we discover what a true relationship between parent and child is all about – the uniqueness of our relationship with Hashem informs us of our relationships with our children.  Then he cites a Chida and a sefer Chassidim.  Ah, yes.  The relationship develops and morphs and the goal is the ultimate dveikus as friends.  And then in footnote bais of the Maamar he cites Rav Shach, putting it all together.

How does he do it?  Rabbi Glatstein’s unique marshalling of the full gamut of Torah sources to prove his points allow him to unfold these latent thoughts and understandings.  Rabbi Glatstein probes and prods further.  Why should this be so?  How does it work?

Rabbi Glatstein’s sefer on Bereishis through Toldos is filled with eye-opening maamarim of such inspirational insights that every single page is an adventure.  Where is he going?, – we ask. It is not really a roller coaster, because we are led by a man of pure Torah thought, so we are confident.  At the same time, there are twists and turns and the end result is that each maamar is capable of remarkable insight and inspiration.

It is no wonder that Rabbi Glatstein’s tapes and lectures have enjoyed such widespread popularity.  He has authored other seforim as well, “Maggid HaRakiah on Adar and Purim”, “Maggid Harakiah on Pesach and Nissan”, and Eloka d’meir Aneini.  He has authored four popular Artscroll books.   Rabbi Glatstein is the Rav of Kehilas Tiferes Mordechai in Cedarhurst. His Seforim are available at finer seforim stores and may also be ordered at RabbiDG.com with free delivery.