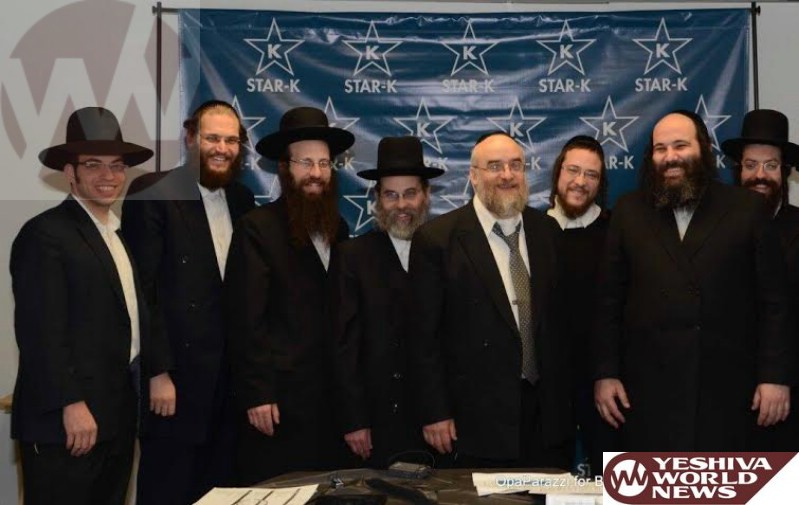 STAR-K Kosher Certification recently held its first Winter Kashrus Training Program for a group of mashgichim from New York. The participants, who live in Boro Park, traveled to attend the seminar in Baltimore on three consecutive Sundays, January-February. The program was the brainchild of Mr. Meir Rand, a Chasidishe mashgiach who has worked in various kitchen venues in Boro Park. Realizing the lack of Chasidishe mashgiach training, he approached STAR-K Kashrus Administrator Rabbi Zvi Holland with his well-accepted idea of a training program.

“I was very, very happy with the program; I learned such new chidushim and how to deal with people in Kashrus work,” says Mr. Rand. “I have no words. It was mamash amazing–meyradik!

“The Chasidishe community doesn’t yet have such a training program for their mashgichim,” continues Mr. Rand. “We have no mesuderdik system for training them and we found out that STAR-K has the best training system for mashgichim. We saw HaRav Heinemann and how he deals with all shaylos with such a klehrkite and how he is behind everything and knows everything that is going on in his organization, all over the world. I realized that we need such a thing.”

Another participant, in food service hashgacha, who preferred anonymity, concurred with Mr. Rand. “Everyone enjoyed it and we can’t stop talking about it. Every section was a world in itself, and everything was organized and given over step-by-step. Everyone was shocked to see bugs on the fruits and vegetables, after we learned how to check properly….You have to have someone experienced to teach you how to look for bugs.”

On Sunday, January 26, STAR-K President Avrom Pollak, presented, “A Certifying Agency’s Administrative Issues”, followed by STAR-K Kashrus Administrator, Rabbi Dovid Heber’s sessions: “On the Home Front—Being a Local Mashgiach for a National Agency” and “Pesach Issues Too Important to Pass Over”. After lunch was served, STAR-K Kashrus Administrator, Rabbi Avrohom Mushell, spoke on, “It’s a Matter of Chemistry”. The rest of the afternoon was spent touring Seven Mile Market, the largest kosher supermarket in the U.S., and participating in a hands-on bedikas tolaim training practicum, with Rabbi Tendler.

Moshe Levy, a chef who worked in catering hashgacha, summed up his STAR-K training program experience: “I never heard such a lecture like this. Nobody ever taught me those things. I really gained a lot. STAR-K is the best hechsher because they know what they’re doing and they are straight.”

“STAR-K is always pleased to assist mashgichim in furthering their education even when they are working for other hechsherim,” noted Rabbi Holland. “This group showed tremendous mesirus nefesh traveling to Baltimore numerous times from New York to benefit from this program.”