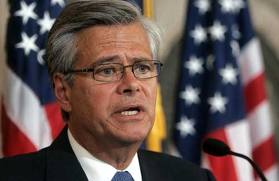 It’s not just a fight between the heads of the City and the State of New York, the brawl over taxing the rich in order to fund universal pre-k has now reached the Senate chambers.

No budget until a tax hike for New York City to pay for universal pre-Kindergarten is included, Senate Independent Democratic Conference Leader Jeff Klein said Monday in a statement. Republican Senate co-leader, meanwhile, issued a statement saying the budget won’t pass the Senate’s approval if any tax hike is included.

This marks the first time the Senate coalition is facing such a crisis, with the differences so starkly discussed in public.

“I will not approve a budget that fails to realize the vision Mayor de Blasio and I share of providing high-quality, universal pre-k to the 50,000 four year olds who need it,” Senator Klein, the coalition’s co-leader, said. “Mayor de Blasio’s plan is the only one that provides New York City with the funding it needs to achieve that goal. Senate Republicans comprise a minority in this chamber–they want more support for business tax cuts and we want more support for our kids. Only by working together can we achieve a balance that works for everyone.”

The statement came after Senate Republican Leader Dean Skelos earlier Monday said he would not allow a floor vote on the legislation, thus embracing Gov. Cuomo’s proposal to fund the program through the budget.

The State’s fiscal yearly budget is due to be passed by April 1. Since the GOP and IDC share leadership of the Senate, both leaders must sign off on a legislation to bring it to the floor.

“To deny a vote on something as urgently-needed and as widely-supported as funding universal pre-kindergarten is just plain wrong,” mayor de Blasio said in a statement. “I commend Senator Klein, Senator Stewart-Cousins and Speaker Silver for standing up for a vote on this critical issue. Politicians in Albany have failed to meet their commitment to pay for universal pre-K time and time again, which is exactly why New York City must chart its own destiny. It’s time for Albany to give New York the home-rule right to ask the wealthiest to pay just a little more in taxes, and I applaud our Democratic allies from across the state who stand with us in fighting for this critical investment.”

NYC’s progressive Council members, who are at the top dealing with the City’s pre-k proposal ,blasted Republican leader Dean Skelos in a joint press release.

“New York City needs a dedicated source of funding for universal pre-kindergarten. For Dean Skelos to say he will prevent a vote on this issue is very short sighted. Study after study has shown that children who receive early childhood education perform demonstrably better later in life than those who don’t receive it. It’s right to ask those who can afford it to pay their fair share of tax dollars,” said Education Committee Chair Council Member Daniel Dromm. “The Mayor’s plan will help create a better, stronger New York City for generations to come.”

State and Federal Legislation Committee Chair Council Member Karen Koslowitz said, “What Senator Skelos fails to mention is the fact the Governor Cuomo’s offer does not provide a long-term solution to keeping Universal Pre-K in our schools. Mayor de Blasio’s plan ensures a sustainable future for these services in our city. As Chair of the Committee on State and Federal Legislation, I will continue to push Albany to move the Mayor’s plan forward regardless of Senator Skelos’ threat to block a vote. The future of our children’s education is worth it.”

“The city has a clear, detailed and comprehensive plan to bring pre-k and afterschool to all of New York City’s children. It has the strong support of New Yorkers. Albany has a mandate to hear the voice of New York City residents and allow it to come to a vote,” said Governmental Operations Committee Chair Council Member Ben Kallos.

The voters of the largest city in the state of New York mandated it,” Women’s Issues Committee Chair Laurie Cumbo added in the joint statement. “It is disgraceful for Senator Skelos and his minority coalition to disregard the will of the people, and it is simply immoral to choose the wealthy over our children.”

Council Speaker Melissa Mark-Viverito  will host a rally in support of universal Pre-K on the Steps of City Hall at noon.