Hundreds of people gathered in Har Nof on Wednesday afternoon for the heartrending levaya of Aryeh Schupak, h’yd, who was murdered by bnei avla in a terror attack at the entrance to Jerusalem on Wednesday morning.

Aryeh, z’l, a talmid of Yeshivas Harei Yehudah in Moshav Beis Meir was on his way to yeshivah when he was killed. 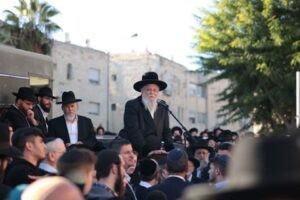 Afterward, HaRav Naftali Schreiber, the menahel of Talmud Torah HaRa’em, where Aryeh learned prior to yeshivah ketanah, spoke divrei hesped. He began by saying: “When I opened the cheder, I thought that I was going to be mechaneich the children of Yisrael in Torah. A year ago, I was maspid a student from Aryeh’s class [Elazar Yitzchak (Azi) Koltai, z’l, who lost his life in the Meron disaster] and I never thought I would have to be maspid another talmid from the class.”

“Your neshama is with us, you see everything,” HaRav Scheiber. He then spoke about how Aryeh wasn’t feeling well on Tuesday and his mashgiach told him not to come to yeshivah the next day. “He couldn’t stay at home. He went – to put on tefillin, for tefillah in yeshivah, a 15-year-old who was oichez in learning, he was destined for greatness. There’s not one friend from his class who learned with him for eight years that ever saw him angry.”

HaGaon HaRav Dovid Yosef then spoke: “How terrible it is to be melaveh a young boy who only recently passed his bar mitzvah. He grew up in a family l’tiferet of tzadikkim. He only learned in yeshivah [ketana] for one year and we’re now being melavah him to the beis hachayim.”

HaRav Yosef then spoke about our tafkid to be mechazeik our emunah in the Borei Olam against the murderous Arab terrorists. “Our fight against them will be via the derech of Torah and kedushah, that we’ll sit and serve Hakadosh Baruch Hu.”

“When we have people among us who battle against the Torah – Hakadosh Baruch Hu punishes us. Those who are battling us are not an ‘Am’ – there was never such a thing as a Palestinian nation.”

HaRav Akiva Orlansky, one of the Rabbanim at the yeshivah where Aryeh learned, spoke in a tear-filled voice: “Aryeh was taken from us. He was the rose of yeshivah, the heart of the yeshivah. He always smiled at everyone, helped everyone. Just yesterday he sat during the seder and reviewed the material and then summarized it in writing.”

Aryeh’s father, Reb Moshe Shupack then spoke words of parting to his son and after Kaddish was recited, the levaya continued to Har Hamenuchos.