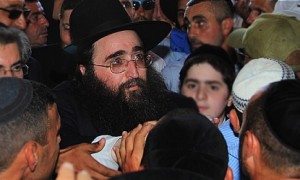 Rabbi Yoshiyahu Pinto has returned to Israel and he is expected to give testimony to police investigators this morning, Tuesday, 27 Iyar 5774. Rav Pinto is a suspect in a major bribery fraud case involving senior police commanders. The investigation against them is being spearheaded by Israel Police’s 433 Unit, Israel’s equivalent of the FBI.

According to the information being released, Pinto has struck a deal with the state prosecutor and he will be testifying as a state witness. Rav Pinto has been working to cut a deal by which he would incriminate the former commander of the 433 Unit, Menashe Arbiv, and in exchange for his information receive immunity. The prosecution however is seeking a one-year prison term for Pinto despite his willingness to cooperate.

Commando Arbiv was compelled to resign his senior post amid harsh allegations of accepting large sums in bribes from Rav Pinto. Arbiv insists that it is Rav Pinto who accepted the money and the rabbi is now seeking to cut a deal to save his skin. The sum allegedly accepted by one of the defendants is 200,000 shekels.

There is a considerable amount of criticism surrounding the state’s willingness to deal with Rav Pinto as many feel the senior police commander who has dedicated his life to public service should have been given the first opportunity to become a state witness and not the rabbi.

Rav Pinto sent a message to his talmidim and followers that in a moment the truth and justice will become apparent to all regarding the criminal allegations against him.