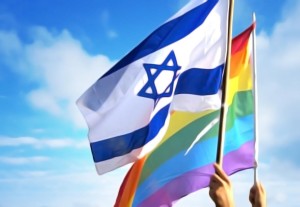 The biggest-ever Tel Aviv “shame” Parade took place on erev Shabbos 15 Sivan 5774 with the participation of over 130,000 people from Israel and abroad. The parade was launched by the Mayor of Tel Aviv-Yaffo Ron Huldai, and marked the peak of a week of events.

A few hours before the launch of the Pride Parade, the Municipality conducted a colorful initiative and painted the curbstones on Bugrashov Street in pride colors.

This year the Tel Aviv Municipality has invested more than $600,000 for the benefit of the to’eva community in Tel Aviv, a city spokesman reports.

Mayor Huldai said “The City of Tel-Aviv-Yaffo embraces the LGBT community and considers it an important part of the urban fabric of Tel Aviv. We hope Israeli lawmakers will embrace Tel Aviv’s model and pass laws that will ensure equality for the LGBT community. Together we will achieve this goal!”