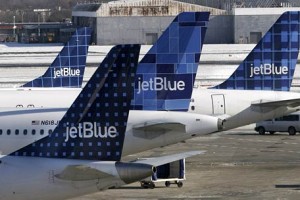 The following article is via WPBF:

A woman is claiming anti-Semitism is to blame for her being thrown off a JetBlue flight leaving from Palm Beach International Airport this week.

Lisa Rosenberg had boarded a flight home to New York Monday night after her vacation in Palm Beach County.

She said she was on the phone with a friend talking about the violence in Israel and her concern for her daughter, who will be studying there next year.

She said the trouble on the plane began when she finished her call.

“A woman comes up to me and says to me ‘I’m a Palestinian,’ and she starts cursing at me. ‘Zionist pig. This is just the beginning,'” Rosenberg said.

Rosenberg said she never said anything negative about Palestinians and was only complimenting Israel on how leaders there have handled this latest conflict.

The argument between the women got heated and a flight attendant had to intervene, Rosenberg said.

A few minutes later, a supervisor told her she needed to leave the plane.

Rosenberg said nobody from JetBlue would answer her questions. She said only the other woman had complained and said she was not comfortable flying with Rosenberg.

“I said, ‘The passenger, the Palestinian passenger, didn’t feel comfortable with me, the Jewish doctor being on the plane?'”

Rosenberg said she was humiliated but left the plane.

JetBlue confirmed Rosenberg was removed from the flight and added the story she tells “in no way reflects the report that we have.”

JetBlue would not release that report and would not specify what’s in it.

Rosenberg said her story is the absolute truth and believes she’s been the victim of a hate crime.

“I just was completely outraged that I would be asked to leave a plane, being a Jew,” she said.

Rosenberg contacted the Anti-Defamation League. Officials there said they are investigating the incident.