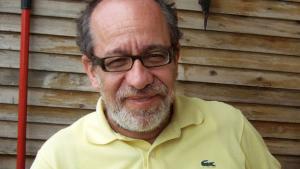 Calls for a boycott of a prominent Turkish author of Jewish descent over Israel’s assault in Gaza are being denounced by politicians in Turkey as a “hate crime.”

Turkey has taken a lead in denouncing the Israeli campaign in Gaza – launched in a bid to stem rocket strikes launched from Gaza at Israel’s citizens – which Turkish Prime Minister Recep Tayyip Erdogan has called a genocide. But the government insists that the criticism is against Israel’s policies, and is not in any way anti-Semitic.

Today, a social media campaign for a boycott of Israeli products sparks a storm of criticism after calls are heard to include works by acclaimed Turkish-Jewish novelist Mario Levi.

Culture Minister Omer Celik describes the “provocations” against Levi as a “hate crime,” while warning Turkish citizens against taking out their anger on the country’s 17,000-strong Jewish community.

“Provocations against Mario Levi, a brilliant author of Turkish (literature), are completely wrong. They are hate crimes,” he writes on Twitter.

Finance Minister Mehmet Simsek, for his part, denounces the attacks against Levi as “an eclipse of reason.”

Footballer-turned-MP Hakan Sukur, meanwhile, tweets: “If people launch a campaign to boycott a writer like Mario Levi for his beliefs, this is a hate crime, to say the least.”

The Istanbul-born Levi, 57, has penned more than 10 novels, most notably the 1999 novel “Istanbul was a Fairy Tale.”

Levi himself has expressed his sorrow over the Palestinian victims of Israel’s military operation in the Gaza Strip, as well as regret over the campaign against him.

“Words are not enough to tell how much the tragic war in Gaza and the death of innocent children is breaking my heart. I can’t believe I have experienced something like this in the country that I love to my bones,” Levi said.