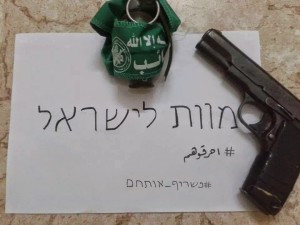 An Arab male employed in a Bnei Brak simcha hall was arrested by police after writing “death to Jews” on Facebook. It was learned that the Bnei Brak employee, a PA (Palestinian Authority) resident, was inside Green Line Israel illegally.

The Facebook posting also showed a burned out IDF tank. He posted the message from his cellular telephone.

Police called on the Tel Aviv Magistrate Court to extend the prisoner’s remand. The court decided to release the prisoner with restrictions, explaining the nation is in a sensitive security situation accompanied by tension and concern, which may cause people to say things that are offensive to others. The court ruled that in a democratic nation the freedom of speech of individuals is paramount for as long as no laws are broken.