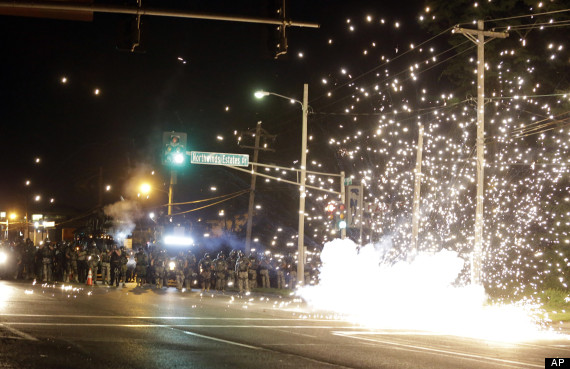 After an unarmed black teenager was shot by a Ferguson, Missouri, police officer, the city north of downtown St. Louis erupted into violent protests. Here’s a look at the key elements of the shooting and the unrest that followed:

THE LATEST: Missouri Gov. Jay Nixon declared a state of emergency Saturday and imposed a midnight to 5 a.m. curfew in Ferguson after tensions again flared overnight. At a chaotic press conference, Nixon said calm had to be restored in the St. Louis suburb. Angry residents shouted down the governor several times as he spoke. Missouri State Highway Patrol Capt. Ron Johnson, who is in charge of security in Ferguson, said police would not use armored trucks and tear gas to enforce the curfew. He said he would communicate with residents to give them ample opportunity to leave.

THE SHOOTING: Police have said that one of the teens pushed the officer into his squad car, then physically assaulted him in the vehicle and struggled with the officer over the officer’s weapon. At least one shot was fired inside the car. The struggle then spilled onto the street, where Brown was shot multiple times.

Dorian Johnson, who says he was with Brown when the shooting happened, has described a different story. He has told reporters that the officer ordered them out of the street, then tried to open his door so close to the men that it “ricocheted” back, apparently upsetting the officer. Dorian Johnson says the officer grabbed his friend’s neck and tried to pull Johnson into the car before brandishing his weapon and firing. He says Brown started to run and the officer pursued him, firing multiple times. Johnson and another witness both say Brown had his hands raised when the officer fired at him repeatedly.

THE UNREST: Since the shooting, crowds have gathered nightly to protest Brown’s death. For four nights, the protests threatened to tear the city apart, with people looting stores, damaging buildings and vandalizing property. Officers from multiple departments in riot gear and military equipment clashed with protesters, who chanted, “Hands up, don’t shoot.” Police used tear gas and smoke bombs, and some protesters hurled Molotov cocktails and rocks at officers.

Nixon announced Thursday that the state would take over supervising security, with Highway Patrol Capt. Johnson — a Ferguson native who is black — leading the effort.

Only hours after the Missouri Highway Patrol took control in Ferguson, the protests changed dramatically, taking on a much lighter, even festive atmosphere. Johnson marched with protesters and several people stopped to his hand or hug him and other officers. But unrest returned on Friday night and there was some looting, prompting Nixon’s announcement of the curfew.

THE POLICE TACTICS: The police response drew heavy criticism from around the nation. Critics say it’s part of a law-enforcement trend toward more aggressive weapons and tactics.

The American Civil Liberties Union in June released a report stating that police were overwhelmingly relying on SWAT raids — involving the use of assault rifles, battering rams and flash-bang grenades — for routine work such as searching for small amounts of drugs and serving warrants.

THE INVESTIGATION: At the request of Ferguson police, Brown’s death is being investigated by St. Louis County police. The FBI has also opened an investigation into possible civil rights violations. Highway Patrol Capt. Johnson also said 40 FBI agents were going door-to-door in the neighborhood starting Saturday, talking to people who might have seen or have information about the shooting.