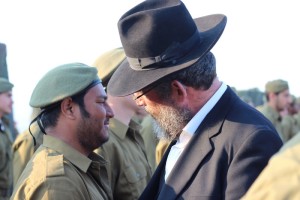 11,000 chareidim reported to the chareidi induction center and received a draft deferment and they were referred to programs offered by the Ministry of the Economy to bring them into the workplace.

The civilian service program failed, with only 801 chareidim opting for service instead of the IDF. This number is a far cry from the predictions from government officials.

Of the inductees in 2013-2014; 863 entered combat units and the IDF is now setting up Tamar, a unique combat training for chareidim that will not be part of Nachal Chareidi but the Givati Brigade. The new option is aimed at increasing the options for chareidim entering the IDF wishing to become combatants.

Committee Chair MK (Yesh Atid) Yaakov Peri told his colleagues the new chareidi draft law is paving the way to the integration of the chareidi community into mainstream society. He added “today, just 14 months following committee approval and 5 months following Knesset approval I am pleased to say that we are witness to the beginning of a social revolution”.