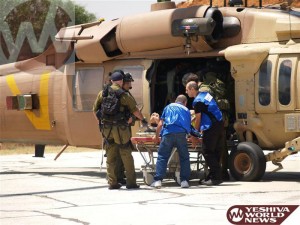 18:58: An IDF soldier was hit by what is being described as spill-over gunfire from Syria a short time ago. The soldier, stationed in the Golan Heights, was struck in a leg and sustained non-life threatening injuries.

According to preliminary reports, Israel views the gunfire as accidental and not intentional. The soldier was transported to Ziv Hospital in Tzfas.