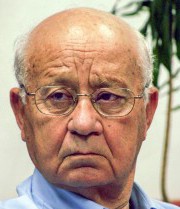 Yitzhak Hofi, a former Israeli general and Mossad chief who played a key role in the country’s daring 1976 commando rescue raid in Uganda, has died. He was 87.

Hofi fought in Israel’s War of Independence in 1948 and rose through the ranks to become head of the northern command during the 1973 Arab-Israeli war. He was regarded as one of the few top officers who warned of the threat of a surprise Arab attack on the Jewish holy day of Yom Kippur.

He headed Israel’s Mossad spy agency from 1974 to 1982. During his term, the Mossad helped rescue Israeli hostages in Entebbe, Uganda after their plane was hijacked.