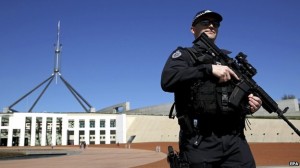 Some experts suspect Tuesday’s attack was inspired by the Islamic State group’s call to supporters to wage terror in their home countries.

An Australian Federal Police officer and a Victoria state police officer who were part of a Joint Counter Terrorism Team had asked the 18-year-old man to come to a police station in southeast Melbourne on Tuesday night to answer questions after first drawing their attention three months ago, Victoria Police Chief Commissioner Ken Lay said.

The trio exchanged handshakes before the man began stabbing the two officers, Australian Federal Police Commander Bruce Giles said. One of the officers then shot the man dead.

“Our members had no inkling that this individual posed a threat to them and as far as we were concerned, it was going to be an amicable discussion about that individual’s behavior,” Victoria Police Assistant Commissioner Luke Cornelius told reporters, adding that the officer had “no choice” but to shoot.

Police declined to say which officer shot the man, or release his name.

It appeared the man was acting on his own, and that the violence was an isolated incident, Cornelius said.

The man had recently exhibited a series of behaviors that had caused police “significant concern,” Lay said, including being seen waving what appeared to be an Islamic State flag at a shopping center.

Colvin said it wasn’t yet clear whether reports the man had threatened Prime Minister Tony Abbott before he was shot were true. But he said the man had not made any “specific threats.”

A second knife was found on the man’s body after he was shot, Lay said.

Both police officers were taken to a hospital. Justice Minister Michael Keenan, who is responsible for the federal police, said the federal officer was in serious but stable condition. The state police officer’s condition was stable.

The prime minister, on his way to New York to attend a United Nations Security Council meeting on the problem of 15,000 foreign fighters who are in Iraq and Syria, said he phoned the wives of the injured police to assure them of his government’s support.

“Obviously this indicates that there are people in our community who are capable of very extreme acts,” Abbott said in a video message sent from Hawaii.

A statement issued by Islamic State group spokesman Abu Muhammad al-Adnani and made public this week asked Muslims to use all means to kill a “disbelieving American or European — especially the spiteful and filthy French — or an Australian or a Canadian” or any disbeliever and others whose countries have joined to try to disable and destroy the group.

“I think that this attack occurring in the context of the fatwa that came out earlier this week, a fatwa that implored followers to attack infidels and ask no one’s permission, thereby really an incitement to lone-wolf attacks — I don’t think that’s a coincidence at all,” Wesley said.

The Islamic Council of Victoria state, a leading Muslim group, said in a statement the tragedy highlighted the need to deal with the root causes of alienation and disaffection of people like the man killed.

“The recent so-called fatwa from overseas making reference to Australia as a target has no religious authority and must be rejected,” he said. “Protection of human life is one of the five basic rights in Islam.”

The Defense Department announced Wednesday that an Australian air force contingent including eight F/A-18 Hornet jet fighters had arrived in the United Arab Emirates. The jets are expected to be used in air strikes against Islamic State fighters in Iraq, although the Australian government has yet to commit to a combat role.

Earlier this month, Australia raised its terror warning to the second-highest level, citing the domestic threat posed by supporters of the Islamic State group. Last week, police detained 16 people in counterterrorism raids in Sydney and charged one with conspiring with an Islamic State movement leader in Syria to kidnap and behead a randomly selected person. Another man faces a lesser weapons charge; the rest were released.

On Wednesday, the government is to propose a law to Parliament making it an offense to simply visit terrorism hot spots abroad. The legislation is designed to make it easier to prosecute Australian jihadists when they return home from Mideast battlefields and carries sentences of up to life in prison.