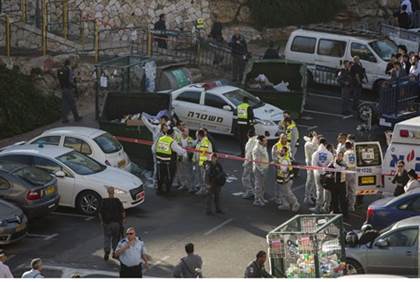 The following was written by Tal Zaguri. He sent this into the editor of דוסים מצייצים.

“And so I found myself in the middle of Har Nof, in a small neighborhood grocery store.

The store owner is talking to one of the workers. Both are discussing the names, just released, of those murdered whilst at this morning’s prayers in synagogue. ”

At that moment a beautiful little 7 year old boy comes in accompanied by his rabbi. The rabbi, in a choked-up voice announces the full name of the smiling bashful child. The grocer immediately realizes that this is the son of one of those killed in the attack. The rabbi signals that the child has not been told anything.

“The grocer rushes up to the little one, ice cream in hand and says: “Here you are sweetie, you can have whatever you want – Do you like these?” “The kid smiles and says he does. Then the grocer whispers to him, “Any time you want something from my store, just come here and I’ll give it to you for free” “The boy whispers back “Thank you” and looks happy.

His Rabbi thanks the grocer with a look in the eye and the two leave. “The grocer could not hold back his tears, and held his head in his hands…”