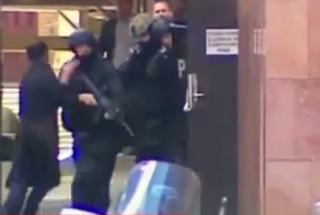 Five hostages have fled from the Lindt Chocolat Cafe in downtown Sydney, but an unknown number were still being held inside as the crisis dragged into its second day and 16th hour.

Local media reported early Tuesday that the gunman is Iranian-born Man Haron Monis. A police official said “you wouldn’t be wrong” in identifying the 50-year-old Monis as the gunman. Under department rules, officials do not identify themselves unless speaking at a formal news conference.