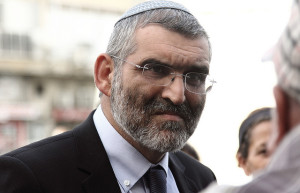 Otzma Yisrael leader Dr. Michael Ben-Ari told the media on 29 Kislev that he is in the race for the 20th Knesset and his has no plans of backing out of the race.

In light of recent arrests of Lehava activists, Ben-Ari was asked if he maintains any connection to them. He replied that he does, “And an excellent relationship with Lehava (להב”ה – למניעת התבוללות בארץ הקודש) (Preventing Assimilation in the Holy Land) head Bentzi Gupstein”.

Ben-Ari detailed that Gupstein has been heard many times speaking out against breaking the law and he pointed out that if one IDF soldier or officer is found involved in law-breaking one does not depict the entire IDF as lawbreakers. In this case explains Ben-Ari, those persons arrested who have broken the law will be held accountable but this in no way reflects on the Lehava organization and its operations.

In his interview with Channel 20, Ben-Ari explains he is running independently under the Patriot party.

Those same right-wing politicians that released terrorists are responsible for raising the minimum threshold from 2 to 4 seats.

When asked about Labor leader Yitzchak Hertzog and Prime Minister Binyamin Netanyahu, Ben-Ari stated “Netanyahu is not right-wing. He is the same as Herzog and he is willing to give away Eretz Yisrael. Please stop playing games. I am the right-wing, not Netanyahu and his colleagues”.

Perhaps Netanyahu feels like you and simply makes political declarations to appease the international community but in actuality, he will not

There are things one does not do or say and this is among them. I am tired of hearing his political declarations.

They have taken all of the smaller parties captive by increasing the minimum threshold for they realized I was only missing about 5,000 votes to enter Knesset. They feared this time I would get it so they increased the minimum.

Ben-Ari then begins speaking about the Knesset decision to declare Rabbi Meir Kahane illegal and how when one becomes a threat, the threat is removed. He is interrupted and not permitted to continue on the topic.