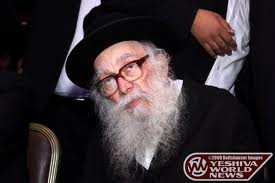 Baruch Rofeh Cholim – HaGaon HaRav Nissim Karelitz Shlita has been released from Bnei Brak’s Mayanei HaYeshua Hospital on Monday, 28 Teves. The rav was admitted with pneumonia about two weeks ago, released and then readmitted with difficulty breathing.

After two weeks of treatment the rav was released to his home B”H.

The tzibur is asked to daven for