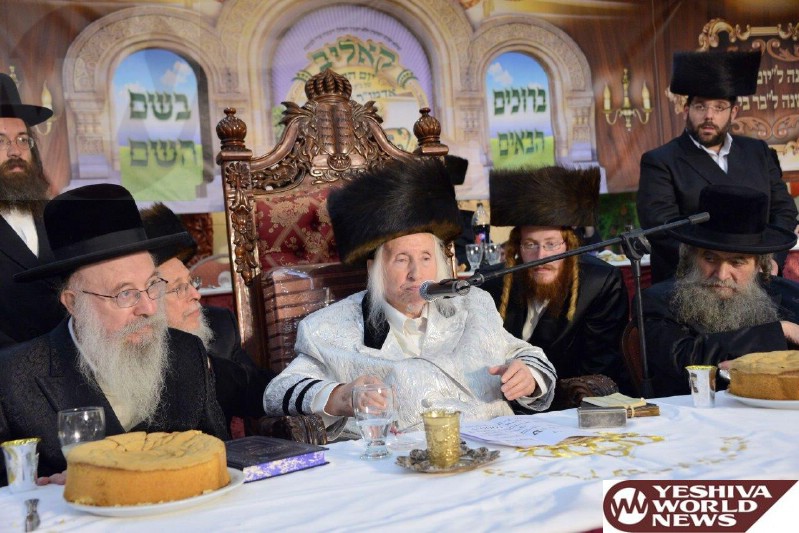 Below is a powerful message by Rabbi Menachem Mendel Taub, the Admor of Kaliv to United States President Barack Obama.

The Kaliver Rebbe, Rav Menachem Mendel Taub, is the seventh in a direct paternal line to the founder of the Kaliver dynasty, Rav Yitzchok Isaac of Kaliv, a disciple of Rav Elimelech of Lizensk.

In 1944, the Rebbe was put on a transport to Auschwitz by the Nazis and he arrived there three days before Shavuos. While in Auschwitz, he was experimented upon by Joseph Mengele ym”sh, and, consequently, is unable to have children or grow facial hair. He was transferred from there to the Warsaw Ghetto and the Breslau concentration camp, and later to Bergen-Belsen. Six months after the war ended, he discovered that his wife had survived, and they were reunited in Sweden. In 1947, they migrated to the United States, where he began his work in memorializing the Holocaust in Cleveland, Ohio.

During the last 60 years, since World War II, the Rebbe has traveled to millions of Jews with his story and the saying of Shema Yisrael. He is active in kiruv rechokim and holds regular shiurim and shmuessen for groups of professionals, including doctors and police officers. In addition, he has directed a network of kollelim, an encyclopedia project, and several other undertakings of chassidus Kaliv.

The Rebbe has authored and published Kol Menachem, a 13-volume work on the Torah and Yomim Tovim, along with several other works.

In March 2014 he participated in the annual conference of the Rabbinical Congress of Europe, which met in Budapest to commemorate the 70th anniversary of the destruction of Hungarian Jewry. He delivered an emotion-laden speech in Hebrew, and switched to English to direct remarks to US President Barack Obama and Russian president Vladimir Putin.