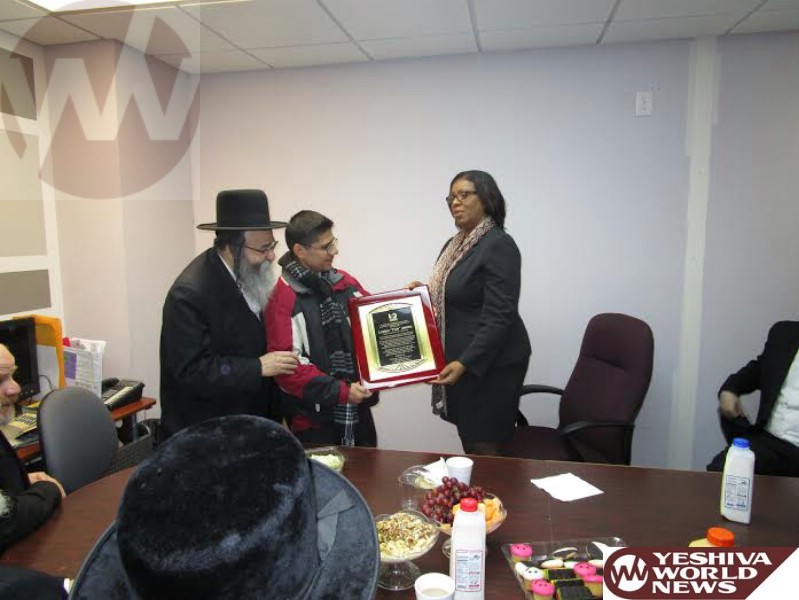 At a meeting today with Williamsburg Community leaders at the United Jewish Organizations of Williamsburg and North Brooklyn, Public Advocate Letitia James was hailed and recognized for her tireless advocacy on behalf of the city, and for each and every individual citizen.

Her role, as the people’s lawyer, was demonstrated publicly when an employee in the area, Mr. Paulino Rodriguez, had his vehicle unjustly impounded and was ticketed for $2,000 for erroneously being accused of driving an illegal taxi. After PA James promptly intervened, throughout a weekend, the ticket was immediately nullified and the vehicle was returned.

Today, the Public Advocate visited the Bais Rachel School in the area, and then met the UJO and community leadership. During that meeting, she was presented a plaque by Mr. Rodriguez and Rabbi David Niederman, UJO Executive Director, for her assistance in rectifying the injustice and assuring that Mr. Rodriguez, a hard-working individual, isn’t unjustly fined.

The plaque states as follows:

“On behalf of the Williamsburg Community, we present our recognition and appreciation to The Honorable Letitia “Tish” James, Public Advocate, City of New York, for her tireless advocacy for the residents of this city, our community and the neighborhood for decades.”

“We are especially heartened by her personal dedication to each and every individual, which was demonstrated in her successful advocacy for the dismissal of the unjust ticket and the seizure of the car of a neighborhood business vehicle on December 4, 2014.

“The citizens of the greatest city of the world are fortunate to have PA James as their advocate, and may she continue to succeed as the people’s advocate and in all her endeavors.

“Presented on February 18, 2015, by the, UJO of Williamsburg and North Brooklyn Board of Directors.”