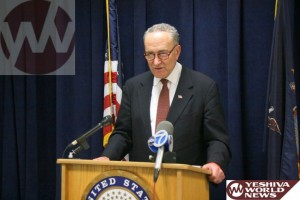 Assemblyman Dov Hikind (D-Brooklyn) had high praise for Senator Charles E. Schumer who called on his fellow Democrats today to attend Prime Minister Benjamin Netanyahu’s speech in Congress next month, noting that the Israel-US relationship should “transcend” any political differences.

“Our Senator has done the right thing and should be commended for it,” said Hikind, who has been railing for weeks about some Democrats boycotting the Israeli Prime Minister. “Senator Schumer understands that America’s leaders must take a decisive role in safeguarding long-term American interests on the international stage. He understands that Iran is the world’s foremost state sponsor of terrorism and that Israel has been our staunchest ally since its inception. I am proud that my Senator and a ranking member of my party, the Democratic party, is doing the right thing by standing up for our interests and sending a clear message to our fellow Democrats.”