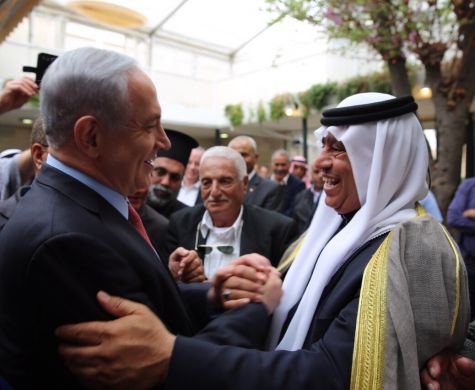 Realizing his comments on Election Day warning voters of the large Arab turnout at the polls, Prime Minister Binyamin Netanyahu on Monday, 3 Nissan, hosted Arab leaders from around the country to apologize in person. Mr. Netanyahu explained that he was sorry for his words that he now realizes were hurtful to members of the Arab community.

“I know that my comments last week offended some Israeli citizens and offended members of the Israeli-Arab community. This was never my intent. I apologize for this.

“My actions as Prime Minister, including the significant investment made within our minority communities, proves the exact opposite. At the same time, no foreign entity should be interfering with Israel’s democratic process.

“I view myself as the Prime Minister of each and every citizen of Israel, without any prejudice based on religion, ethnicity or gender. I view every citizen as my partner in building a more secure, more prosperous State of Israel and a nation that benefits the needs and interests of all our citizenry”, he told those present.

While his remarks were received warmly by those present, the head of the Arab bloc in Knesset told Israel news that he and his colleagues do not accept the apology, adding the prime minister plans discriminatory policies harmful to Israeli Arabs in this incoming administration so they prefer to judge him by his actions and not his words.