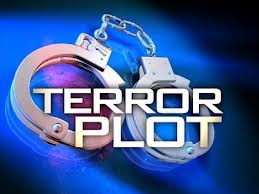 A fourth man was charged on Monday in a terrorism case accusing him of raising money for a plot to have U.S. residents travel overseas to fight for the Islamic State.

Dilkhayot Kasimov was named with three other previously charged defendants in a revised indictment unsealed in federal court in Brooklyn. He faces charges of conspiracy and attempting to provide material support to a terrorist organization.

Prosecutors accused Kasimov of working closely with another man, Abror Habibov, to raise $1,600 for a third, Akhror Saidakhmetov, to travel to Syria to join the Islamic State militant group, also known as ISIS or ISIL. Saidakhmetov was carrying the cash when he was intercepted at John F. Kennedy International Airport on Feb. 25 trying to board a flight to Turkey, court papers say.

After being detained on immigration charges, Kasimov admitted he delivered the money to the 19-year-old Saidakhmetov and knew that the teen “might be” traveling to Syria, court papers say. Agents also uncovered “electronic communications in which Kasimov encouraged others to participate in violent jihad,” they said.

Kasimov “served as a money man in support of a co-defendant’s efforts to join ISIL,” Diego Rodriguez, head of New York’s FBI office, said in a statement.

Kasimov is scheduled to be arraigned Wednesday in Brooklyn. The name of his attorney was not immediately available.

Last month, Saidakhmetov, Habibov and Abdurasul Hasanovich Juraboev — all immigrants from the former Soviet republics of Uzbekistan and Kazakhstan — pleaded not guilty in the same case. Prosecutors accused Juraboev of also trying to travel to Syria via Turkey to join the Islamic State.

Juraboev first came to the attention of law enforcement during the summer of 2014 after he made a posting on an Uzbek-language website that backs the Islamic State, court papers say.

“In his post, Juraboev offered to engage in act of martyrdom on U.S. soil on behalf of ISIL, such as killing the President of the United States,” the papers say.

Defense attorneys for the three men originally charged in the case have denied the allegations.

The charges against Kasimov come amid a spate of recent terrorism cases related to the Islamic State’s efforts to attract foreign fighters or encourage sympathizers to launch an attack in America. Last week, two women were arrested on charges that they sought to build a homemade bomb after embracing the radical views of groups like al-Qaida and the Islamic State.