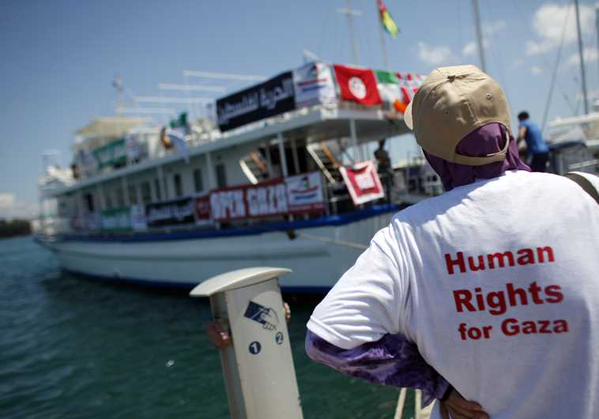 The Gaza Flotilla 3 has set sail on board the Marianne av Goteborg heading for Gaza to break the IDF Navy blockade on the Hamas-controlled area. The organizers on board the vessel, including Arab MK Basel Ghattas insists they are brining humanitarian and medical supplies to Gaza, calling on the international community to compel Israel to release its stranglehold on Gaza. There are some 70 persons on the vessel, which the IDF Navy is unlikely to permit to reach the restricted area of the Gaza shore.

One Israeli activist who took part in previous flotillas and is on this vessel, Dror Feiler, spoke with Nazareth-based al-Shams Radio. He explained that someone tried to sabotage the mission, going under the boat and damaging the propellers. He feels “dark forces” seeking to prevent him and his colleagues from accomplishing their mission is responsible for the sabotage.

Ghattas told the press that his is not just about headlines, but bringing the plight of Gazans to the international headlines. Regarding his colleagues in Knesset critical of his actions, he calls them “hypocrites”.

He added “I don’t want to compare this to what happened with the Mavi Marmara flotilla, but I want to remind you Israel apologized for this incident in the end.”

The flotilla is expected to arrive sometime in the beginning of next week if it is now intercepted enroute.