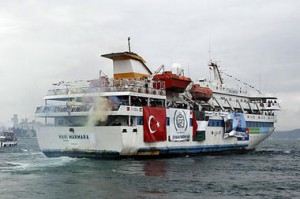 After a second round of talks, which was held in Israel, a draft agreement has been reached between the countries by which Israel will make compensatory payment to the families of nine Turkish nationals who were killed in the 2010 Israeli commando raid on the Marvi Mamara. Deputy Foreign Minister Ze’ev Elkin led the Israeli delegation in this round of negotiations.

The effort to mend fences with Turkey was spearheaded by US Secretary of State John Kerry during his recent visit. Kerry’s efforts led to a formal apology to Turkey by Prime Minister Binyamin Netanyahu, who explained renewing diplomatic contacts with Ankara today is too important to permit an apology to get in the way. Israel realizes that Turkey may play a vital role in an IDF military strike against Iran’s nuclear program by permitting airspace access and other assistance.

The details of the draft agreement are not being released by the Prime Minister’s Office as Mr. Netanyahu is currently on a state visit to China.