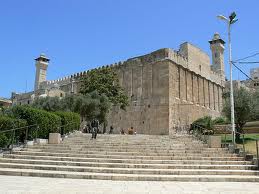 It was a violent Tisha B’Av night in the Ma’aras HaMachpelah in Hebron and confrontations erupted between Jews and border police. The Jews complained the muezzin was disrupting the recitation of Eicha, leading to the confrontations after police explained they will not act to stop the interference.

The fragile atmosphere that prevails in Hebron was shattered once against on motzei Shabbos, the eve of Tisha B’Av in the Machpelah in Hebron. The Jews became irritated by the calls from the muezzin, calling on police to act, explaining it was difficult to proceed with Megillas Eicha. Police refused to intervene despite the fact the Jews explained it was not a Muslim prayer time and the chants by the muezzin were simply to interfere with the davening in the Machpelah.

After police ignored all requests to act, a number of Jewish youths went to the room from which the muezzin was broadcasting and prevented him from leaving. This led to a confrontation between the Jewish youths and border police, prompting the latter to use pepper spray against them.

Baruch Marzel exclaimed the heads of the security establishment are to blame, stating “They are always acting in favor of the Arab enemy at the expense of the status quo. They permitted the opening of their stores despite the security dangers posed to the Jews by the decision and these acts have brought Hebron to the verge of an explosion”.