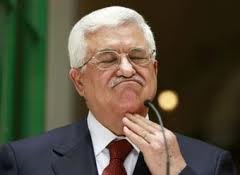 In an act of chutzpah that is synonymous with his public statements, PA (Palestinian Authority) leader Abbas []Abu Mazen] has now announced to the international community that he will protect holy sites and he will not permit Israel to harm these sites. This comes from the head of the PA, which regularly and routinely permits vandalizing and destroying Jewish and Christian holy sites in areas under PA (Palestinian Authority) control.

In his latest diatribe, the PA leader addressed “violence on Har Habayis”, as if the violence is being precipitated by Israel and Jewish visitors. It appears the PA leader took his cue from Jordan’s King Abdullah, who this week spoke out warning Israel that attacks on al-Aqsa will impact relations between Jerusalem and Amman, another Arab leader who wishes to accuse Israel for the violence on Har Habayis.

Speaking to PA officials in Ramallah on Wednesday night, Abu Mazen stated “al-Aqsa is ours”, adding “they do not have any right to desecrate it with their filthy feet and we will not permit this”, possibly referring to police entering to stop riots and attacks against them by Arab youths from inside the mosque. He made a number of other statements vowing “We will remain in Jerusalem forever”, stating how Jerusalem belongs to his people.