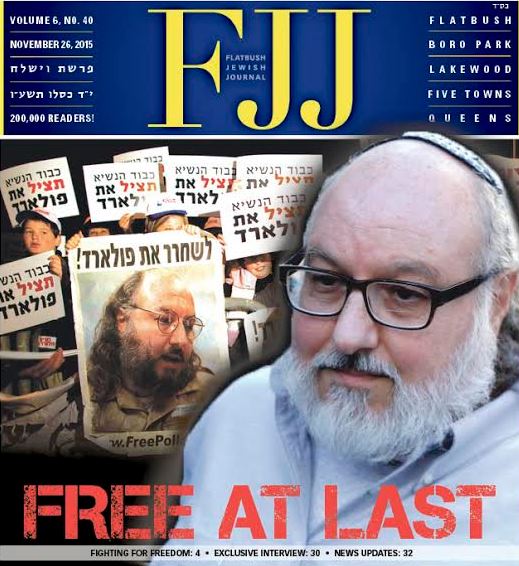 Rabbi Pesach Lerner is the Executive Vice President, Emeritus, of the National Council of Young Israel. For the past 25 years, he has been a close friend and advocate for Jonathan Pollard. The FJJ Publisher interviewed him this week, after Jonathan was freed. The following is the interview which appears in this weeks Flatbush Jewish Journal:

1. HOW AND WHY DID YOU GET INVOLVED IN THE JONATHAN POLLARD CAUSE?

I joined the National Council of Young Israel (NCYI) before Succos, 1991. I decided that to properly help the nationwide shuls in the movement, it would be a smart idea to go visit every shul in the country. Eventually, I did visit just about every shul in the USA that belonged to the Young Israel Movement. One of the first branches I visited was on the Lower East Side of Manhattan. They were having a program about Jonathan Pollard. The speakers posed many good questions about the unfairness of the situation. They made a lot of sense, too much sense. I went back to my mentors, Askonim including Reb Chaim Kaminetsky z”l, then National President of NCYI, and Jewish leaders including my Rebbe, Rabbi Naftali Neuberger of Ner Yisroel. They encouraged me to follow through. I discovered that Jonathan was a Jew sidelined by the Jewish establishment. They chose to ignore his plight. Reb Chaim Kamenetsky z”l and I were not the type to leave a Jew behind, so we continued our research and in a short period of time, we ended up visiting with Jonathan and discovered a very special individual.

This led me to more visits, more involvement in the case. We started to become more vocal under the banner of the Young Israel Movement, which had a long history of caring for Klal Yisroel, taking on many causes that may not have been politically correct. As we started uncovering more information and asking more questions, many others began to realize that we had a point. Slowly and surely, it became a more accepted and more important cause.

Over the years, I and the others involved met with various Gedolei Yisroel throughout the world and got their encouragement and blessings to continue fighting for Jonathan. We even obtained a joint letter to former President George Bush from Maran Harav Elyashiv zt”l, and ybl”c Maran Harav Steinman shlita.
Dovid Nyer, a young man from Monsey, got involved and persistently lobbied former government leaders and former officials, including Henry Kissinger, George Schultz, and James Woolsey, former Director of the CIA. They wrote letters encouraging his release as soon as possible. Slowly but surely, we were able to build a case.

In general, when visiting a person locked away for so long, you would expect to find him bitter and angry. Remarkably, I found Jonathan to be warm, friendly, happy and upbeat. At times, he conveyed a sense of humor.

I visited Jonathan often, sometimes as much as six times a year. Sometimes we had an agenda, a working meeting to make progress in the case. Sometimes, we sat like two brothers, just shmoozing and giving him chizuk. I would bring quarters for the vending machine. A prisoner is prohibited to touch money. I would go buy him two yogurts and other things that he couldn’t get in jail, virtual luxuries in his unfortunate environment.

At first my visits were up to five hours long. In later years, due to government spending cutbacks, sequester, the visits were limited to just Sundays, for about 3-4 hours, depending on what time I arrived.

3. WHAT WAS THE HIGHEST AND LOWEST POINTS IN YOUR BATTLE FOR FREEDOM?

There were always ups and downs. Every time we made progress, stumbling blocks were put in our way, and we fell back a few steps.

In the summer of 2014, Jonathan applied for parole and he was denied. Various officials made statements that he was the worst spy in the history of the world. I visited him a week later, and we thought there was no hope. This was a very low point.

I would join Rav Mordechai Eliyahu, former Chief Rabbi of Israel, who would visit Jonathan once a year. Those visits were truly high points to Jonathan.

Faith and Emunah in Hashem. His wife, Esther, was moser nefesh for him. Without her, I don’t believe he would have been able to reach this stage. His attorneys, Elliot Lauer and Jaques Semmelman, took the cause pro-bono fifteen years ago, and selflessly devoted themselves to his ultimate release. There was a small group of people in Eretz Yisroel who never gave up and there was a small group in the U.S. that were committed to Jonathan.

Rav Aryeh Zev Ginsburg, a Rav in Cedarhurst once joined me to visit Jonathan. He sat there and had a wonderful conversation. Jonathan shared a conversation that he had with Rav Moshe Sherer of Agudath Israel over the phone. Rabbi Sherer asked him to keep three things in jail: try to keep Kosher as best you can, try to keep Shabbos as best you can, don’t be mad at G-d.

Keeping Kosher is a test we should never have. For many years, Jonathan never received Kosher food. On Pesach, sometimes, he would survive on one box of Matza for the entire week. For Jonathan to keep Kosher was a huge mesiras nefesh.

Keeping Shabbos was very challenging. He worked in a prison eye glass factory six days a week, including Shabbos. Jonathan at one point decided that it’s not for him anymore and he requested a change of jobs from the eye glass factory to being an orderly. This meant he would have to clean filthy bathrooms and showers in prison, demeaning himself to avoid a real Chilul Shabbos. By being an orderly, he was able to work very lightly on Shabbos in order to avoid real Melacha.

Rav Ginsburg then asked the question to Jonathan – what if Rabbi Sherer would ask you today if you kept his three requests? He answered, “Kashrus and Shabbos I kept but with great difficulty. On your last request, I am not mad at G-d. I have had some very difficult conversations with Him, but I am not mad at Him.”

He was on lockdown for the final day, totally out of contact, as he was being processed for freedom. During the early hours of Friday morning, they released him and he had private transport to New York. He was met by his two attorneys, his wife, and myself. He had to report to the parole commission at 9:00 AM Friday. He spent part of his day in his apartment in Manhattan. His wife presented him with a most meaningful gift – a new Tallis, Tallis bag and Tefillin. On Shabbos, he had food that he hasn’t had in thirty years, including pineapple which he made a Shehechiyonu on.

6. HOW HAPPY IS JONATHAN NOW?

He is very happy he is out, thrilled to spend time with his wife. Sunday he went to a supermarket with her and was overwhelmed by the variety of food, the prices, and the people. However, although he is out of prison, he is not free. The parole restrictions are very severe, almost like house arrest.

He is on lockdown in his apartment from 7 pm to 7 am. He is restricted in where he can go in Manhattan. He cannot visit Brooklyn or Queens, New Jersey or anywhere else. He can’t get a job because his computer or any other computer in the system would be able to be inspected by the government and no employer would put themselves through that, unfettered government inspections. The restrictions are terrible and numerous.

8. WHAT DO YOU PREDICT FOR JONATHAN’S FUTURE?

Unfortunately, that future will depend on numerous outside factors. Hopefully he will acclimate to the outside world, have time despite the restrictions to use his talents and find a way to contribute to society. He has inventions that he believes could contribute to society. He is very bright and very creative. He loves to read books about Zionism and Jewish History, Military Science and History and alternate forms of energy.

Jonathan will not be fully free until he is able to bentch gomel standing in front of the kosel!

9. WHAT LESSONS CAN WE LEARN FROM THE JONATHAN POLLARD STORY?

To appreciate the simple things in life. The overabundance we are blessed with causes us to take everything for granted.

We, as a community, have a responsibility to every individual. The individual is the Klal. We have the ability to do the impossible. We have to take on what’s right.
A few years ago, terrorists slaughtered the Fogel parents along with some of their children. The surviving children wanted very much to visit Jonathan, so arrangements were made. I joined Jonathan during that visit. Shlomo Zakheim z”l made the flight arrangements. The Fogel children and their grandfather were there, and Eli Rowe, and Shlomo Zakheim. Jonathan at one point mentioned that he is taking a certain medication, and Mr. Zakheim immediately commented that with that medication you must drink twenty cups of water a day. Jonathan answered, “yes, Baruch Hashem.” They asked him, “why Baruch Hashem?” He answered, “it gives me a chance twenty times a day to make a bracha!”
This story is a great lesson for myself and anyone who wants to listen; if Jonathan could say that while he was confined in that situation, then we should yearn to make brochos and thank Hashem, without any of those constrictions.

10. HOW HAS YOUR INVOLVEMENT AFFECTED YOUR FAMILY?

It took a lot of personal and professional time. My family fully supported me over the years. At the moment, they are very proud of the accomplishments, Baruch Hashem.

On behalf of Klal Yisroel, the FJJ extends its heartfelt appreciation to Rabbi Lerner for granting us this interview, and most importantly for the decades of selfless devotion he gave to Jonathan Pollard.