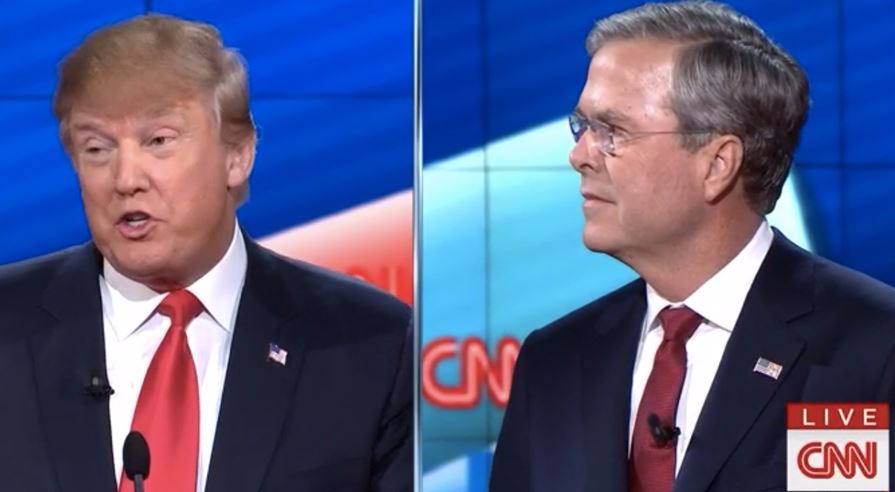 With two weeks to go until Iowans head to the polls in the first vote of the 2016 primary season, Republican front-runner Donald Trump ramped up his attacks against rival Ted Cruz on Friday, while Jeb Bush scored a key endorsement for his White House bid.

“I have concluded without any hesitation, any doubt, that Jeb Bush is worthy to be commander-in-chief on day one,” Graham said Friday at a joint press conference with Bush.

As South Carolina’s senior senator, Graham has been a coveted endorsement for some candidates running for the Republican nomination because he holds clout among establishment Republicans in South Carolina, one of the critical early voting primary states. Bush was initially considered a serious contender for the Republican nomination for president, but his campaign eventually lagged behind candidates like Trump and Cruz, who have each positioned themselves as anti-establishment alternatives.

“The thing I admire most about Jeb is that he has stayed true to who he is, that he hasn’t tried to get ahead in a contested primary by embracing demagoguery,” Graham said.

Meanwhile, Trump went on the offensive Friday, calling Cruz “strident” and labeling his remarks about “New York values” in the GOP debate “disgraceful.”

Appearing in an extended interview on MSNBC’s Morning Joe from Des Moines, Iowa, Trump said Cruz “hurt himself” in Thursday’s debate with his sweeping remarks about the political ideologies of New Yorkers.

Cruz said in the debate: “everyone understands that the values in New York City are socially liberal or pro-abortion or pro- gay-marriage, focus around money and the media.”

His comments evoked a provocative, front-page response from the New York Daily News Friday telling Cruz to “go back to Canada,” a reference to the senator’s Canadian birth which Trump has raised as a potential barrier to his rival’s right to run for president.

At the debate, Trump countered with an emotional recounting of his hometown’s response to the Sept. 11 attacks.

“When the World Trade Center came down, I saw something that no place on Earth could have handled more beautifully, more humanely than New York,” he said. “That was a very insulting statement that Ted made.”

Asked by MSNBC Friday about the exchange with Cruz, Trump said: “Y’know, he’s a good debater, but he’s very strident, and a lot of people are not going to like that.”

More than two hours of prime-time argument Thursday presented voters with a sharp contrast to the optimistic vision of America that President Barack Obama painted in his State of the Union address earlier this week. The debate was one of two final opportunities for the candidates to lay out their visions for the country ahead of the Feb. 1 Iowa caucuses.

In Iowa, where polls indicate a narrowing race between Trump and Cruz, Trump released his second television ad on Friday, which marks a significant departure from the first one he released earlier this year. While that ad painted an alarming picture of a country under attack by jihadists and immigrants entering the country illegally, the new ad is much more traditional, featuring footage of Trump speaking at a recent rally in Lowell, Massachusetts.

In the new ad, Trump runs through his central campaign platforms, including his vows to strengthen the country’s borders, “fix” it’s health care system and the military, and take better care of veterans.

The ad will be airing in the early voting states of Iowa and New Hampshire, according to the campaign.

The Trump campaign is also giving out free tickets to the new movie, “13 Hours: The Secret Soldiers of Benghazi.” The campaign has rented a theater in Iowa, for the free screening on Friday.

The film depicts the events of the September 2012 attack on the U.S. consulate in Libya that killed four Americans, including Ambassador J. Christopher Stevens. It follows a group of ex-military security contractors trying to save American lives in a dusty and hostile Benghazi.

Several GOP presidential candidates have slammed Democratic front-runner Hillary Clinton for her role before and after the attack in Benghazi, saying she knew from the start it was an act of terrorism.