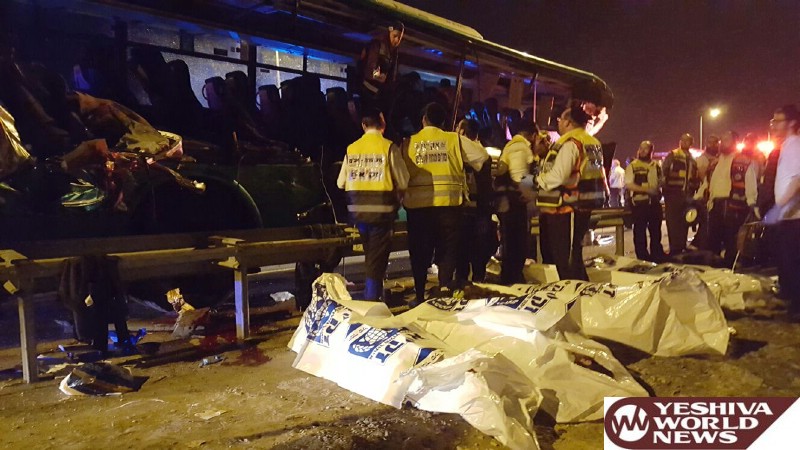 At least five people have R”L been killed in a serious crash on Sunday evening on Route 1.

Dozens of emergency personnel responded to scene of the crash which involved an Egged bus and a tractor-trailer.

The bus is the Egged #402 line from Jerusalem to Bnei Brak, and was full of Chareidim.

UPDATE 8:09PM IL: Israel Police Traffic Enforcement Unit Chief Deputy Commissioner Yaron Be’eri has ordered the establishment of a special investigation team and is refraining for releasing any additional information due to the volume of rumors circulating, explaining when he has hard facts he will inform the public.

There is a total of 3 persons in critical condition in different hospitals, with doctors working to save their lives.

After interviewing the driver and speaking with his brother, who he called minutes before the crash by the driver, it appears the driver called and explained he was pulling over because of mechanical issues, giving added credibility to reports that accident was driver error by the bus driver and not an intentional act on the part of the truck driver as some felt may have been the case.

UPDATE 8:00PM IL: The following is a translation of a bulletin to the media released minutes ago by the Israel Police Traffic Enforcement Unit.

The possibility of a terror attack is being probed. It appears however the accident is the result of human error on the part of the number 402 bus driver from Jerusalem to Bnei Brak. The bus left Jerusalem at 17:40 and it does not appear to be terrorism as rumors are indicating. the truck driver was moderately injured. He is a resident of the eastern capital.

The injured were transported to Kaplan, Tel Hashomer, Assaf HaRofeh and Shaare Zedek Hospital. Route one from Jerusalem is closed to traffic.

UPDATE 7:47PM IL: All of the injured were transported to Assaf HaRofeh, Kaplan and Sheba Medical Center at Tel Hashomer Hospitals. Assaf HaRofeh reports one victim in emergency life-saving surgery at this time. B’chasdei Hashem most of the injured are not in life-threatening condition.

UPDATE 7:44PM IL: While Zaka has a great deal of work to complete on the scene of the fatal crash, police are signaling they plan to reopen the highway in the coming minutes, well-aware of the traffic pileup that has resulted in the closure due to the accident. All motorists who do not absolutely have to use Highway 1 are urged to take an alternate route.

Ichud Hatzalah CEO Moshe Teitelbaum reports it will be some time until the bus and truck are cleared from the area but confirms, police are hoping to reopen the highway soon. 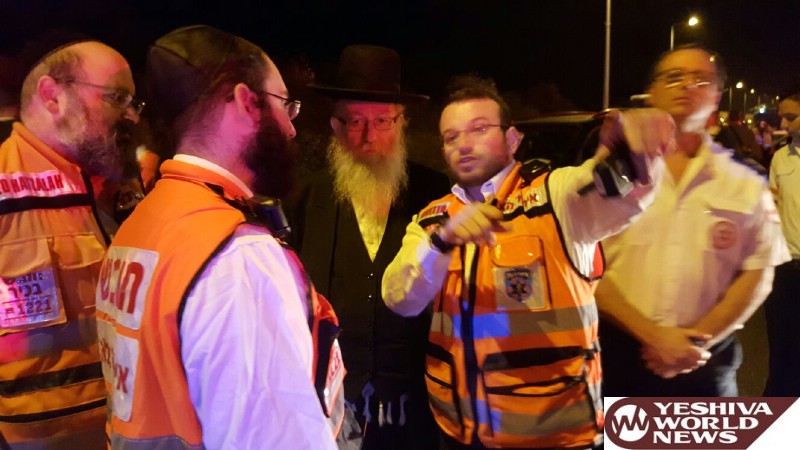 UPDATE 7:41PM IL: Health Minister Yaakov Litzman has arrived at one of the hospitals that received victims of the bus accident commenting “A horrific site, no other words. To our sorrow there are fatalities and persons seriously wounded”.

One of the wounded is now reported critical and another in serious condition. Some of the victims were taken to Kaplan Hospital in Rehovot and Assaf HaRofeh in Rishon L’Tzion.

The bus left Jerusalem for Bnei Brak until getting to the Latrun area, where the truck with the building materials was parked on the side of the road. The bus driver began braking but he was not able to stop in time. It appears he did realize the truck was protruding into his lane, but the driver had nowhere to go. Both the bus driver and truck driver are being questioned by police. Contradicting this report are statements the bus driver did not realize the truck was in his lane, but this does not explain why he began braking.

It is confirmed children are among the dead R”L. It will take some time to piece the pieces of this accident together. The head of the Israel Police traffic investigations unit is on the scene along with other senior officials to make certain to oversee each step of this investigation. Channel 2 News reports the truck driver was slightly injured, adding the bus driver simply did not see the parked truck in the dark. Needless to say the details surrounding the accident are most likely to change as accident investigators piece together the pieces of this tragic puzzle.

The Jerusalem-Tel-Aviv Highway remains closed in both directions from Ben-Gurion east (to Jerusalem) and Latrun west (towards the airport). 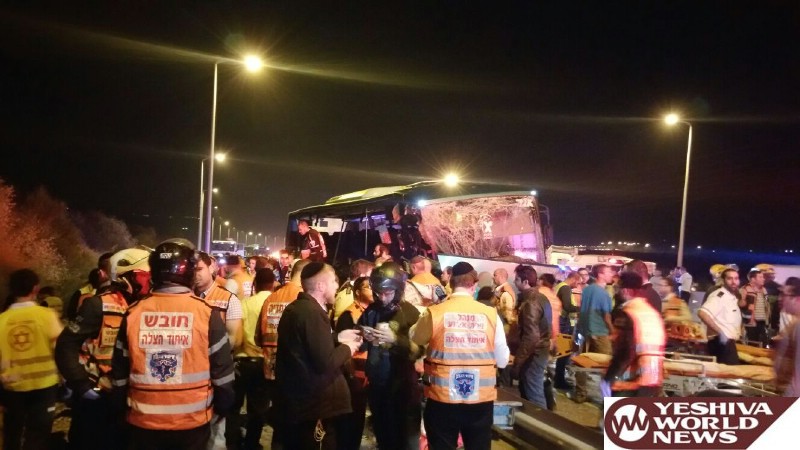 UPDATE 7:27PM IL: Despite a great deal of confusion and contradictory reports, it is confirmed that the bus involved in the crash was an Egged 402 from Jerusalem to Bnei Brak that departed from the capital at 17:40.

It is added by police that the truck was protruding into the right lane of the highway and police are questioning the driver, an Arab resident of the eastern capital to determine if he might have parked his truck this was intentionally to cause a crash as occurred.

Highway 1, the Jerusalem-Tel Aviv Highway, is now closed I both directions from Latrun west and Ben-Gurion Airport east. 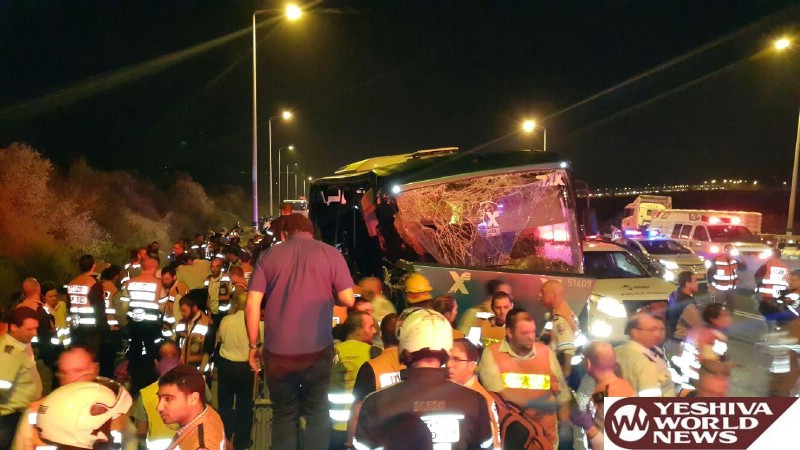 UPDATE 7:16PM IL: As emergency workers continue working on the scene, the magnitude of the disaster is becoming increasingly evident R”L. The official death toll has now reached five.

According to preliminary police reports, an accordion (double) truck was parked on the side of the road and for reasons that remain unknown as this time, the bus’s right side was sliced along its entire side as it passed the truck.

Channel 2 News reports all of the wounded have been taken from the scene and on their way to area hospitals, including Assaf HaRofeh Hospital. MDA spokesman Zaki Heller reports the number of injured transported from the scene is 25, including the dead. More to follow 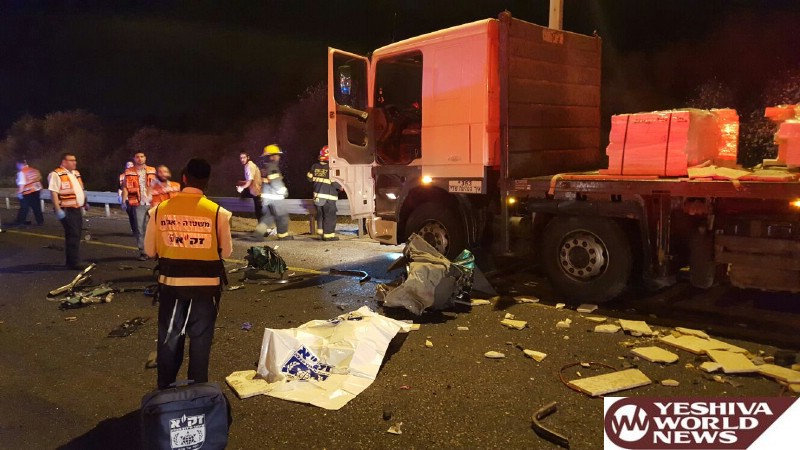 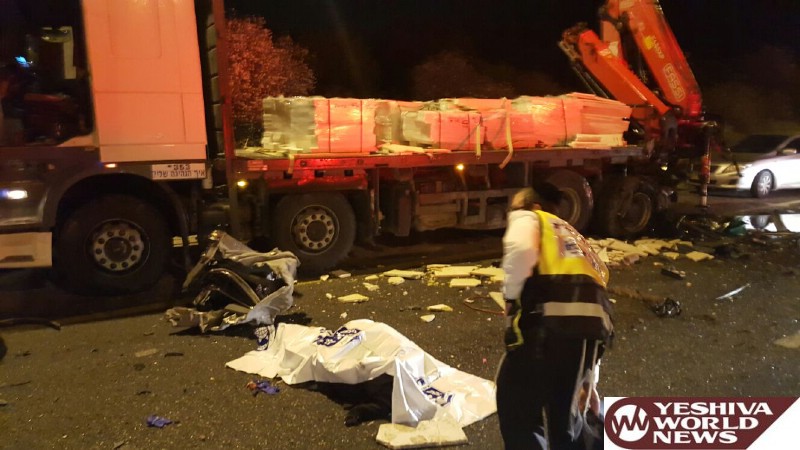 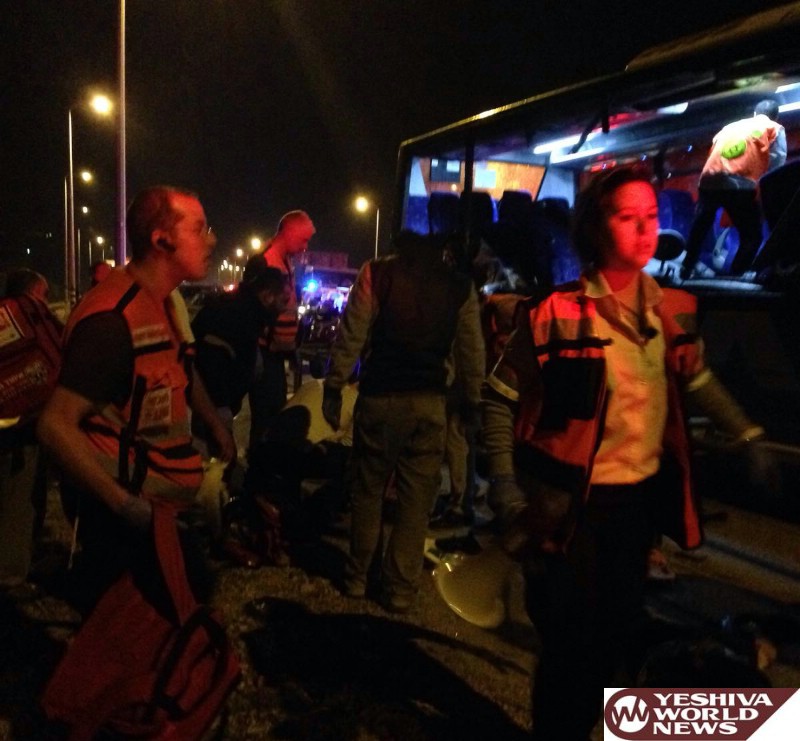 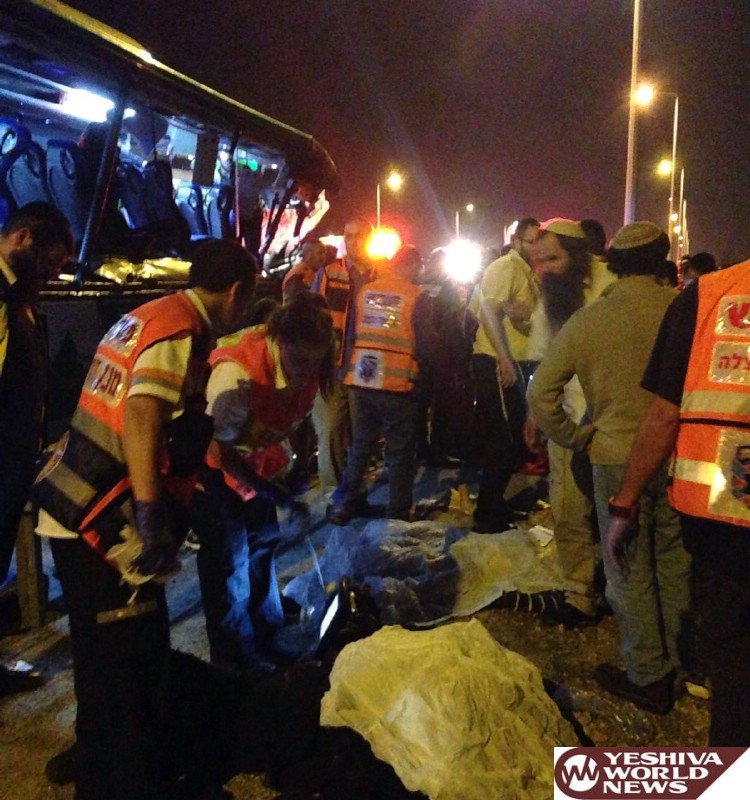 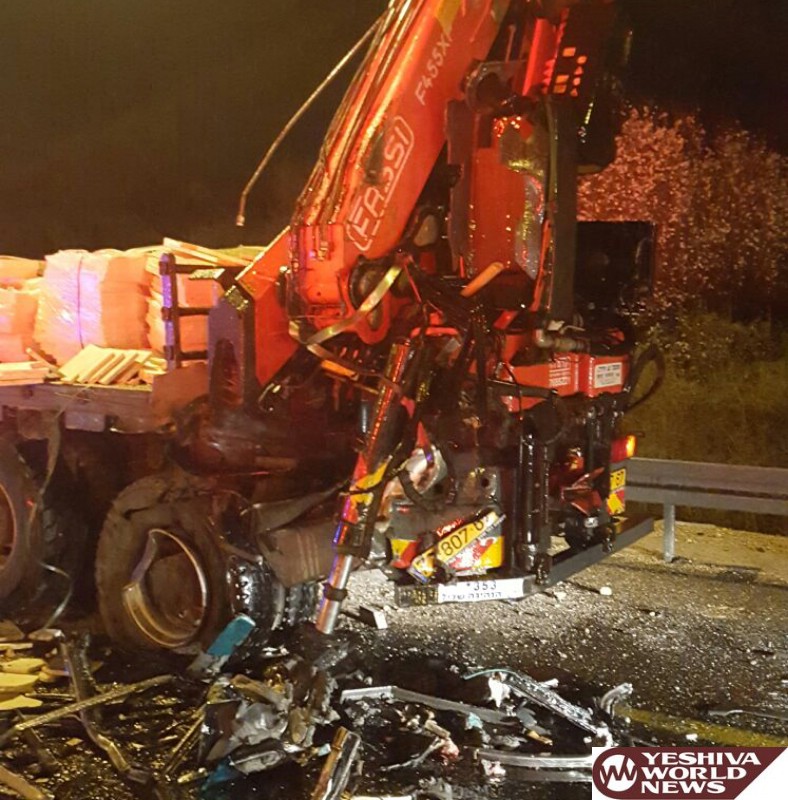