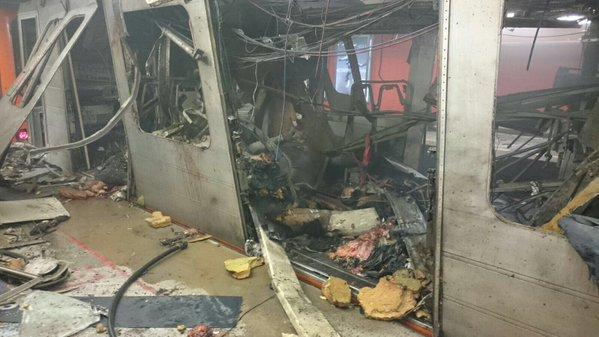 Two explosions rocked the Brussels airport and subway system Tuesday, prompting a lockdown of the Belgian capital and heightened security across Europe. At least 26 people were reported dead and dozens of others injured.

One explosion occurred in Departure Hall 1, Checkout 4 in the Brussels Airport. According to survivors of the blasts, prior to the explosions they heard gunfire and then shouting in Arabic.

European Jewish Association (EJA) Director Rabbi Margolin told Israel Radio following the blast that he lives in Brussels and he is in the airport where the blast occurs twice weekly, attesting to minimal security. Many news commentators have stated the security in the airport is indeed minimal and one can enter and leave without being subjected to any type of inspection, as Rabbi Margolin reported is the case.

An anti-terror expert interviewed by Sky News following the blast explained that security agencies were operating at Level 3 prior to the blast and have now moved to Level 4, the highest. He explained that the only difference between level 3 and 4 is the level of exchanging of information.

At least one additional blast occurred in a metro station, apparently the Maalbeek station near EU buildings. In this presumed attack, an explosive device reportedly detonated in a crowded train car. There are an unspecified number of fatalities at that location.

All metro stations in Brussels remain closed at this time.

Europe to Israel are operating on schedule despite reports to the contrary earlier. In addition, takeoffs from Ben-Gurion Airport to Europe are operating. Two flights that were heading to Brussels have been diverted to another airport.

Emergency cabinets are scheduled to convene in France and Britain as European nations are evaluating the attacks in Brussels today, Tuesday, 12 Adar-II 5776. Police in Brussels have instructed all persons to remain indoors.

Among the wounded in Brussels is reportedly a Belzer chossid, avreich Chaim Weintrintz, who B’chasdei Hashem only sustained light injuries according to reports.

Chaim, who lives in Yerushalayim, is in Antwerp for a family simcha. Family members were in the airport heading back to Eretz Yisrael when the attack occurred. He was injured lightly in a leg and being treated in a local hospital.

“What we feared has happened,” Belgian Prime Minister Charles Michel told reporters. “In this time of tragedy, this black moment for our country, I appeal to everyone to remain calm but also to show solidarity.”

Belgium raised its terror alert to the highest level, diverting planes and trains and ordering people to stay where they were. Airports across Europe immediately tightened security.

European security officials have been bracing for a major attack for weeks, and warned that the Islamic State group was actively preparing to strike. The arrest Friday of a key suspect in the November attacks in Paris heightened those fears, as investigators said many more people were involved than originally thought, and that some are still on the loose.

“We are at war,” French Prime Minister Manuel Valls said after a crisis meeting called by the French president. “We have been subjected for the last few months in Europe to acts of war.”