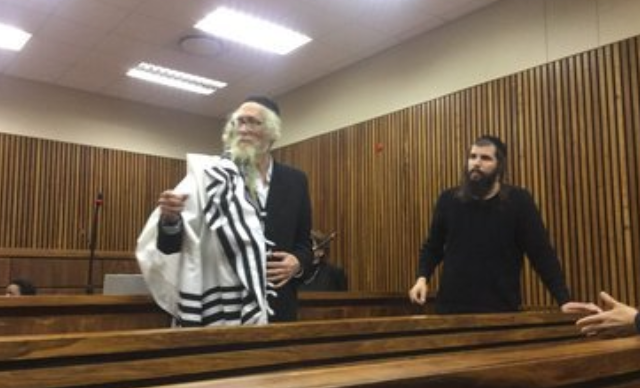 The Johannesburg Magistrate Court denied bail for Rabbi Eliezer Berland, head of the Breslov Shuvu Banim Kehilla, and ordered him to remain in custody. The court said that Rabbi Berland was a flight risk and he was therefore denied bail.

In court, the rabbi was described as an elderly man in poor health.

His defense assured the court he has ties to South Africa and won’t flee if granted bail.

However, the State pointed out he fled Holland while on bail a few years ago after being arrested and set to be extradited to Israel.

The State argued that if he ignored his bail conditions once, what would stop him from doing it again.

His lawyer, Themba Langa, says the magistrate ruled that he is a flight risk despite his age and has access to money and a number of passports.

But Langa says they will appeal.

“The magistrate emphasized the fact that the rabbi did not comply with bail conditions in Holland and the court wasn’t convinced that, if granted bail, he would do the same.”

Tensions were running high among chassidim, who were waiting to hear the verdict, if the Rabbi will be extradited to Israel or be released. Thousands of his chassidim recited Tikun Klalli at Meoras hamachpela last night..

Israel Police have been after the Rabbi for a number of years, hoping to finally hear the extradition request is granted to send him home to face an investigation based on complaints by multiple women against him in Israel.

The rav’s saga during recent years has been difficult as he has been on the run, entering and fleeing from a number of countries as was reported by YWN-ISRAEL.

VIDEOS BELOW ARE FROM LAST WEEKS COURT PROCEEDINGS: