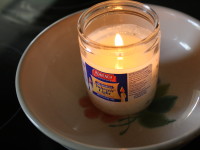 This article was written l’ilui nishmas the author’s father, Nosson Yoseph Ben Moshe whose yartzeit is 5 Iyar. Dr. Nate Hoffman z”l was a man who personified chessed and the pursuit of truth and knowledge.

It is the custom within Klal Yisroel to light a Yartzeit candle on the day that a relative had passed away. The lighting has no accompanying blessing, and people would like to express themselves in a Tefillah when lighting the candle. This is not only true on a Yartzeit but whenever Yom Tov comes as well.

The author of the Peleh Yoetz, Rabbi Eliezer Papo (1785–1828), did in fact compose such a prayer. Rav Papo was the Rabbi of the city of Selestria in Bulgaria. Bulgaria was a part of the Ottoman Empire at the time. The Tefillah of the Pelehe Yoetz is reproduced and translated below, as a public service.

Behold I am lighting this lamp for the resting and uplifting of the soul of my father, my teacher _______ the son of _______. May it be Your will before You Hashem Elokainu and G-d of our forefathers, that all the good deeds that I do will accepted with mercy, whether in thought, in speech or in deed. It shall all be for the merit and rest and for the elevation of the souls of Your nation, Israel. It should especially be a merit for the spirit and soul of my parent _____. May it be Your will that their souls be bound in the pebbles of life.

We further observe their yahrzeits by saying kaddish, learning in their memory, and fasting. Many people also try to perform acts of Chessed on this day as well – all for the merit of the deceased.

But what are the reasons behind our custom to observe a Yahrtzeit? Is it a Torah Mitzvah or a derabanan? Below we find 17 reasons behind this minhag.
Please note that much of the information below is found in Rav Aharon Levine’s wonderful sefer called “Kol Bo L’Yartzeit (Vol. I Chap. 1).”

• It is a fulfillment of the Mitzvah of V’ahavta l’rayacha kamocha. Rav Yitzchok Isaac Sherr zatzal Leket Sichos Mussar (p 329) cites three sources for the application of this Mitzvah to parents. The Zohar (Raya Mehemnusa Dvarim page 281a) writes that we are obligated to love our parents as we do ourselves, for their love is equated to the love of Hashem. The Sefer Chareidim 9:37 writes that loving them is part of the Mitzvah of honoring them. The Chayei Odom 67:1 also writes that we are obligated in loving them. The matter is of some debate, however, as the Maharal in his Chidusshei Agados 31a seems to be of the opinion that there is no greater obligation to love parents more so than other Jews.

• It is a fulfillment of Kivud Av v’aim. The Gemorah Kiddushin 31b explains that the Rabbis taught- You honor him in his lifetime and you honor him after death. Both Dayan Weiss (Minchas Yitzchok Vol. III #136:9) and the Tzitz Eliezer (Vol XII 59:3) are of the opinion that Kivud Av v’Aim after death is also biblical.

• It is an obligation of Hakaras HaTov – recognizing the good that one had received from another. This is particularly true that we should recognize all that parents have done for us on a day that we have the ability to give merit to their neshama and assist in their receiving greater reward.

• It brings a Kapparah, an atonement for the Neshamos. The Arizal in his Shaar HaKavanos writes that the Neshama’s record is reviewed on the day of the Yarhrtzeit. Thus when the children do maasim tovim, learn Torah, say kaddish and do other Mitzvos, this atones for anything the Neshamah might have done.

• It brings an elevation for the Neshama. Even if the Neshama was free of sin, there are different aspects of performances of Mitzvos that are taken into account when the Neshama reaches the upper realms. Observance of the Yahrtzeit assists in elevating the Neshama [See Panim Yafos on B’haaloscha “Kach es hal’viim].

• It avoids violating Lo Saamod al Dam Rayacha. The Torah tells us not to stand idly by one’s brother’s blood. If we just ignore an opportunity to place a parent on a higher spiritual level – this is tantamount to standing idly by another’s blood.

• It is the fulfillment of the obligation to perform Chessed. The greatest Chessed is the one that is done to someone that cannot return the favor. Those that are the shochnei afar – cannot repay anyone. Observing a Yahrtzeit is thus one of the greatest Chassadim.

• It counteracts the Raya Mazlei of the Neshama. When a Neshama ultimately passes away, there is a Raya Mazlei aspect to him. Although we say Ain mazal l’yisroel – at times there are elements that effect the mazal too according to some Rishonim. Observing the Yahrtzeit through the act of free choice of his descendents – counters that force.

• It is proper to be pained on that day. This is the day that we have lost a parent. It is wrong not to feel pain on that day.

• It commemorates the day of one’s loss. Only when we truly know the pain of losing something do we truly appreciate the value of what we have. We can appreciate the gifts that Hashem has given us when we commemorate and understand the loss.

• It affords one to empathize with the pain of the parent. Empathy is a very human characteristic that Hashem wants us to develop. On the day of the Yahrtzeit we are empathizing with them.

• It strengthens our belief in Tchiyas HaMeisim. One of the pillars of Torah true Judaism is the eventual restoring of the dead. If we ponder the gift of the yearly seasons, we see how things that wither away eventually come back. This helps us in our belief in Techias HaMeisim. The same is true with a Yahrtzeit – it helps entrench within us the fundamentals of our emunah.