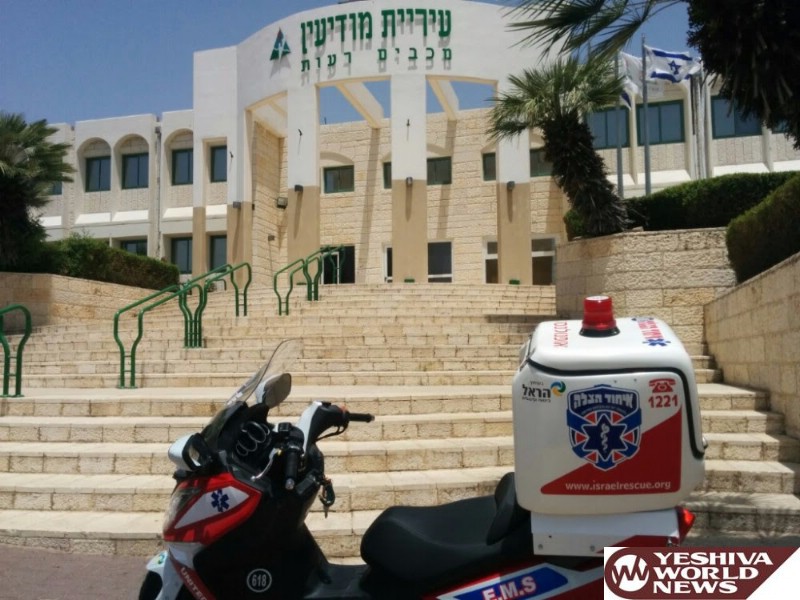 Soon-to-be-residents of Modi’in, Ben and Miriam Casper, decided to honor their friend Yoni Jesner, who was killed while riding a bus in Tel Aviv just before Sukkot in 2002. Ben recalled his friend Yoni as being full of life and having wanted to be a doctor. Casper felt that the most fitting legacy for Yoni would be having a life-saving ambucycle donated in his name. “He had dreams of a profession in medicine, and these dreams were tragically cut short. A mobile, medical emergency help unit — what a beautiful way to continue the many programs and initiatives dedicated in his memory,” said Casper.

During the bus bombing that claimed Yoni’s life, his own cousin, Gideon Black, was standing next to Yoni. Both Gideon and Yoni were hit with shrapnel from the explosive. While Yoni suffered a direct hit to his head and passed away the following morning in the hospital, Gideon was hit in his neck and survived the incident.

Over 13 years later, Yoni’s memory still lives on among those who loved him. Casper, who lives in Woodmere and is a commercial real estate broker with Jones, Lang and LaSalle, initiated the fundraising drive together with his uncle Phil Rosen. Rosen had introduced Casper to United Hatzalah a few years ago and brought him to meet United Hatzalah Founder, Eli Beer. Following the encounter, Ben and Miriam decided to sponsor a volunteer. More recently, the couple has been looking to get more involved in donating to the organization.

“We sponsored a volunteer named Eyal Roth, since we have been very moved by all of the work that United Hatzalah does. We have been very inspired by the posts and the content that United Hatzalah sends out and the work that they do in getting to someone and providing medical aid for them as quickly as humanly possible,” said Casper. “Now we want to get more involved.”

“I believe that donating an ambucycle in Yoni’s name, someone who wanted to go out and save lives but whose dream was cut short, was the most fitting tribute.” Casper said that he garnered support for the project from all over, but that his uncle, who has already donated a few ambucycles to the organization, sponsored half of the bike and gave Ben the challenge of coming up with the other half.

A fully equipped United Hatzalah ambucycle costs $36,000 to purchase and equip. The new ambucycle will join the existing fleet in the area around Modi’in and is expected to go out to 600 calls each year, which is the national average of response calls handled by an ambucycle currently. “Every life saved, every person helped, will be thanks to our efforts,” said Ben excitedly.

“I gathered some support from the guys who were friends with Yoni in Yeshiva and we embarked on the journey of raising money for the ambucycle. Phil joined us and offered to match our donations for the ambucycle.”

Casper was surprised by the amount of support that he received for his project. “People who have no connection to Israel or to Yoni saw the campaign and began to donate. The story is one that had a sweeping effect on a number of people who were enthralled by the concept of the ambucycle.”

Casper recalled his feeling of elation once the target goal was achieved. “When we finally raised the funds, I felt a tremendous sense of pride together with my family and friends who wanted to be a part of this endeavor. I’m really excited to know that this life-saving vehicle, this tool, would be out on the road.”

“We hope to launch the ambucycle sometime in the summer and then hold a special ceremony for it toward Sukkot, around the yartzheit of Yoni. We hope to donate the ambucycle to Modi’in, where we will be moving in the summer, or to a city that has an even greater need. Overall, we are very happy to be moving to Modi’in and happy that United Hatzalah has a chapter there to help watch over the people in our new city.” Currently there are 12 ambucycles in and around the Modi’in area, covering a population of over 155,000 people.

Casper says that making his choice of which charity to donate to, and honor the memory of his friend, could not have been clearer. “What really drew me to United Hatzalah is that one can really see the results of one’s money and its use of helping to save lives each and every day.”

“There are many different types of charity; those that provide emotional support, medical research, food for the poor, support the learning of Torah, etc. Without drawing any qualitative differences between the many charitable causes, if you’re looking for a charity where you can see the tangible results of your charity money at work, United Hatzalah is one of the finest we have found,” said Casper.

“When we hear accounts of the volunteer and ambucycle that we sponsored saving lives and knowing we had some small part in that, well that just pulls firmly at our heartstrings,” Casper added. “The thought of an ambucycle zipping around the city in Israel that we will soon call home with Yoni’s name on it, just brings tears of joy (with a bit of sadness) to our eyes. Yoni was a helper, and would be proud of what this organization is doing.”